Update Required To play the media you will need to either update your browser to a recent version or update your Flash plugin.
By Marsha James
31 August, 2016

Fauci has carried out important research in HIV/AIDS and other diseases affecting the immune system. He also is the director of the National Institute of Allergy and Infectious Diseases (NIAID) at the United States National Institutes of Health.

At age 75, Fauci has served under five presidents during his tenure. His advice is sought all over the world when infectious diseases threaten to become public health crises. He says, when considering the history of public and global health, vaccines could be the most important intervention that has ever been developed for any public health issue. 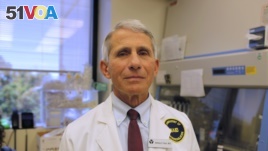 Dr. Anthony Fauci, head of the National Institute of Allergy and Infectious Diseases

That was the case with the serious disease caused by the West Nile Virus.

"West Nile Virus was never in the United States until 1999. It was in the West Nile area of Africa and in the Middle East and it came over to the United States, likely through a mosquito, or a bird, or a person who was infected. And we had a few cases for the first couple of years and then we had an outbreak a couple of years after it arrived and now, it's endemic at a low level in the United States. It isn't a major public health threat, but it is enough of an issue that we get enough cases each year and that's the reason why we have to have good mosquito control. We tried to make a vaccine, and would have made a vaccine, for West Nile years ago, but we couldn't find a pharmaceutical company that was interested in partnering with us."

Today, another virus spread by mosquitoes, the Zika virus, is an issue of concern to the world. Zika outbreaks are currently happening in many countries and territories.The mosquitoes that can spread Zika live in many parts of the world, including parts of the United States. Fauci says pregnant women should be especially careful.

"What people need to understand about Zika is it's important to protect pregnant women. It is likely that Zika was in Africa and in Southeast Asia for decades and decades before we had the first recognized outbreak. In the United States, we have close to 700 already travel-related cases. We've had local outbreaks of dengue and chikungunya in Florida and in Texas and we've been able to successfully contain it. I believe we need to do the same thing, and will do the same thing, with Zika."

Fauci will tell you he is a proud workaholic. That means he enjoys working a lot. He works 7 days a week. He says there are many difficult problems in his work. However, just as important as his job, is his health. He is a devoted runner. Fauci has run several marathons and many 10-kilometer races. He also makes sure that, every day, he does something related to exercise.

Fauci hopes that one day it will become possible to eliminate controllable infectious diseases.

Marsha James wrote this story for Learning English. Mario Ritter was the editor.

Try this quiz to practice your listening skills

tenure – n. the amount of time that a person holds a job or office

endemic – adj. growing or existing in a certain place or region

pharmaceutical – adj. of or relating to the production and sale of drugs and medicine

devoted – adj. having strong love or loyalty for something or someone

eliminate – v. to remove something or someone

era – n. a period of time that is associated with a particular quality, event, person, etc.

alleviate – v. to reduce the pain or trouble of (something) : to make (something) less painful, difficult, or severe