Update Required To play the media you will need to either update your browser to a recent version or update your Flash plugin.
By Marsha James
23 November, 2016


Every year, billions of kilograms of fresh produce are wasted in the United States. The food ends up in landfills, producing harmful greenhouse gases. Meanwhile, millions of poor Americans go hungry, without access to healthy, affordable meals.

Evan Lutz is passionate about correcting that social injustice. And he combines that goal with a passion for business.

"My entire life I've wanted to become a social entrepreneur, not just starting a business that made money but also one that gave back. I'm just an average guy with a passion towards, towards making sure no food goes to waste and making sure no person's ever hungry in America and I want to do that through business."

Lutz is CEO and founder of Hungry Harvest. Hungry Harvest is a business which collects and sells "ugly" produce. These are fruits and vegetables that most food companies would throw away. Lutz says more than six billion pounds are wasted each year due to surface imperfections and processing inefficiencies.

"So I'll give you an example. If you go to a grocery store and walk down the aisle and see all the produce lineup shiny, perfect, same size and color you might notice that everything, everything if you go to a farm right everything doesn't grow the same way on a farm. But if you go to a grocery store everything is growing the same exact way. Right. So all that stuff that doesn't grow the same way, oftentimes gets wasted, gets thrown out. And so we take all that stuff that normally get thrown out because it's too big too small in odd size of shape, we box it up into a variety boxes and we deliver to our customers once a week."

"Every week on Monday or Tuesday we will decide the contents box which will go into the next weeks box right, so we will call up farmers, we will work with packing houses and wholesalers to give them calls, shoot them emails, shoot them texts even or do in person visits to see what they have available that would normally get thrown away that week. We then place the order when we can accurately project how many customers and how many boxes we will have that weekend and so that's the process on Thursdays. And on Fridays we will actually make the boxes for Saturdays. Saturdays we'll make the boxes for Sundays. Sundays will make boxes for Mondays and all of those days we'll do deliveries so Saturdays we'll send out drivers they'll come to our warehouse and make deliveries." 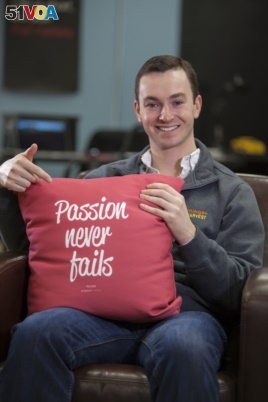 Lutz was inspired to act after seeing extreme poverty in areas of Baltimore, Maryland. He says he wants to eliminate the so-called food desert in that area.

"Our plan for 2016 is actually to eliminate a food desert in Baltimore. And how we're going to do that we already have the infrastructure in place. We have drivers that make deliveries to our customers every single week. We have an assembly line and we can use recovered boxes. And really what we want to do is have access to certain areas of Baltimore to fresh produce for really cheap and we'll work on accepting EBIT and WIC and food stamps by the end of the year. So people will go on in these food deserts and be able to go online pay a reduced price for those boxes and then we'll have volunteers then actually assemble and deliver the boxes for us. And that's how you limited food desert grant people access to healthy affordable foods."

In January 2016, Lutz appeared on the American business competition television show "Shark Tank." It connects investors with entrepreneurs. Lutz sought a $50,000 investment in Hungry Harvest, in exchange for a five percent stake in his company. He got even more than he expected: $100,000 for 10 percent ownership.

Lutz is using the money to expand. Right now consumers can receive produce from Hungry Harvest in Maryland, Virginia, Philadelphia and the District of Columbia.

"So, we want to be the largest produce delivery service on the East Coast in five years and the largest in the United States in 10 years. And we wanted to do that with a purpose of reducing food from going to waste and feeding hungry families. Like I said there's six billion pounds of produce that go to waste every single year. How amazing would it be if we can reduce 1 billion pounds of that from going to waste and give that to our customers and donate that to hungry families right. Or if there are 50 million people that are food insecure. What if we could eliminate that and make it 25 million people that are food insecure in the next 10 years right. That's the impact. I think this model can make. And that's exactly what we plan to do over the next ten years."

For Evan Lutz, giving back to others came from his upbringing.

"When I was growing up my parents instilled in me the values of giving back and giving is a lot more powerful than receiving. And so I wanted to bring that to life when I was fulfilling my career dreams of being an entrepreneur."

Lutz says Hungry Harvest has turned that hope into a reality.

"I live breathe and literally eat hungry harvest. So this is my entire life. I'm not unsatisfied at all not having a life outside of hungry harvest this is what I do. And I love what I do. It's a dream come true"

But Evan Lutz now has even bigger dreams for Hungry Harvest. Why not end food waste and hunger in America.

And so we live by this mantra of... we want to live a life of purpose. And we do that and we just happen to sell fruits and vegetables. So everything we do has a social purpose, has a social impact in Hungry Harvest and that is reflected in how we live our daily lives. And we're really happy to be fulfilling great mission and to be doing something that's really sustainable and that we think can really revolutionize the food industry in America."

Next time on People in America, meet Athena Zhe, Visual Artist and Bodypainter.

landfill – n. a system in which waste materials are buried under the ground

affordable – adj. not too costly

inefficiency – n. the lack of ability to do something or produce something without wasting materials, time, or energy: the quality or state of being inefficient

food desert – n. a city area in which it is difficult to buy affordable or good-quality fresh food

WIC – Women, Infants and Children (WIC) is a federal assistance program for healthcare and nutrition of low-income pregnant single women, breastfeeding women, and infants and children under the age of five

instill – v. to gradually cause someone to have (an attitude, feeling, etc.)