Neftalie Williams: Skateboarding Is a 'Tool for Cultural Diplomacy'

Update Required To play the media you will need to either update your browser to a recent version or update your Flash plugin.
By Marsha James
04 January, 2017


Skateboarding involves riding and performing tricks on a small oval board attached to four wheels. It can be considered a recreational activity, an art form or a method of transportation.

"When I'm skateboarding, I feel free. It gives me the space to do what I want to do and sort of tune out the rest of the world. All I do is what feels good to me, what feels great under my feet and it lets me belong to a larger community. So I feel it all, all at the same time."

As a young adult, Williams gained a larger view on skateboarding.

"Right when I got to be about 20 years old, that's when I decided that not only was skateboarding important, but it's something that I should really, really be involved in --- not just working on being an amateur sponsor skater, but that skateboarding meant more to more people and it was a way to sort of connect communities everywhere.

"So, for me, I started thinking about skating in a broader context. I ended up putting together my own skateboarding camp for kids in New England, because that was me wanting to give back to the sport that gave me so much life. And a lot of my good friends have now become pro skaters and they were counselors at my camp at that time. So, that was my first foray into making things bigger for skateboarding as a whole." 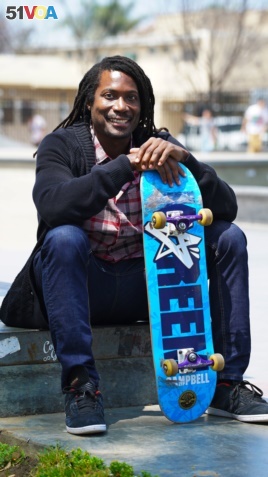 Neftalie Williams is a researcher and lecturer with the Annenberg School of Communication and Journalism at the University of Southern California (USC). He teaches a course called "Skateboarding and Action Sports in Business Media and Culture."

Williams studied skateboarding in college and received a master's degree in Public Diplomacy from USC. He is the first professor in the United States to teach the sport.

"I am the first professor of skateboarding and action sports here in the U.S.,especially at a major university, USC. I've been looking at how skateboarding can be used as a tool for cultural diplomacy. So, when it came time to bring the class together, they knew that I'd been working out in the field in Cuba and Brazil and South Africa and that we were trying to find new ways to engage youth all over the world.

"So, when it came time to propose having a class that talked about it, they looked at the fact that I had the experience, that I also had all the ties within the skateboarding network to bring in great people -- leaders in the field -- and that we were really also looking at the role of gender in new sports and how to actually make inroads and communicate with our youth. They thought it was a really great idea and we went forward."

The course has proven to be popular among students. But Williams has kept the class size small, permitting just 25 students to officially register for the course.

"So, by having them both together they got to know one another, be totally engaged with each other and to spend time knowing what the future of the Netherlands was going to look like. And it wasn't just, 'this is a project for those kids' or 'this is just something for the elite.' For some of those kids it was the first time they ever got to see skateboarding up close. And they all became immediate parts of the skateboarding community."

Because the skateboarding diplomacy project was so successful in the Netherlands, the State Department has asked for Williams's help in creating skateboarding projects in other countries.

"So we're creating a plan right now to take skateboarding globally as an envoy. Some of the other countries that the U.S. government would like to engage using skateboarding as a tool for cultural diplomacy are Kyrgyzstan, Afghanistan, Cambodia and Ethiopia."

In addition to his work empowering and uniting skateboarding communities, Neftalie Williams is chairman of Cuba Skate, designed to create people-to-people exchange between communities in Cuba and the U.S.

"So one of the main things that are important with our working with Cuba Skate is that there are no skate shops on the island. So, what we want to do is foster entrepreneurship in the youth so that they can create their own skate shops, their own cooperatives, give them a blueprint to look at how businesses are run here in skateboarding, [and] how they can run their own educational facilities there in Cuba."

A major issue in the Cuban skateboarding community is its growing female membership.

"Cuba has a very large skate population and it's growing all the time. With skateboarding being moved to the Olympics hopefully in the future, it's nice to see that so many women are starting to take up skateboarding there and that there is no disparity between the men and women on the island."

However, Williams says there are a few barriers Cuba Skate faces.

"The biggest obstacles that we face in Cuba skate is that we still have travel restrictions, there's still an embargo in place and that makes our work a little difficult. The good thing, though, is that we have our hearts in a light place because we know that progress is being made on both sides."

"One of the most amazing thing that skateboarding teaches you is how to re-imagine yourself and the world around you. That's very important because we have skaters all over the world who, particularly in Cuba, don't have access to resources. So, they've got to now look at themselves and figure out, 'how do I exist in this space?'

Neftalie started in skateboarding as a teenager. He says he, and other neighborhood kids, chose skateboarding because bicycles were too costly.

Williams says the sport has given him so much. He says he hopes his work in skateboarding and the community will help ensure that the next generation of leaders is smarter and more culturally aware.

"Skateboarding to me is freedom. It's family. It's education. It's transportation. It's really the most amazing thing in the whole wide world. It gives us the freedom to do whatever we want anywhere. And that's something that...that's the most important thing to me. That freedom and that ability to communicate globally."

Next time on People in America, meet Melody Bales, the Lady from Haiti.