Peter Ripken: A Life in Literature

Update Required To play the media you will need to either update your browser to a recent version or update your Flash plugin.
By Marsha James
01 March, 2017


Peter Ripken loves literature. The man from Frankfurt, Germany reads books by writers all over the world. And he learned years ago that not all nations permit writers to express themselves freely. In fact, free expression can be quite dangerous in many places.

So, Ripken decided to act. He helped establish an organization to protect writers. The International Cities of Refuge Network, ICORN, was born in 1993. Its founders sought to persuade cities, not central government, to give refuge to persecuted writers.

"I got involved in the program where persecuted writers are being given refuge in cities in Germany, and Frankfurt was one of the first cities and I was involved right from the beginning, from the mid 90s, to set up this program. The first organization was called "International Parliament of Writers." In 2006, then we came together and established ICORN - International Cities of Refuge Network."

It was not his original plan. He had a different view of his future as a young man.

"When I was 15 I was thinking because of my reading obsession to become a bookseller when I was 15, sort of graduating from primary school. And then my mother said, ‘You do your high school diploma first and then you can still become a bookseller' and so on. So she influenced me on that."

A bookseller he did not become. Instead, in the late 1960s, Peter Ripken began a five year stint as a manager in an aid organization working in Africa. But his affinity for the written word remained strong. And then he got a call.

"Then I was being asked, ‘Can you help us, somebody has defected our radio station?' So, I worked for three years at that radio station, Voice of Germany that is the equivalent to Voice of America. I worked as a deputy editor for the Africa section and I liked it. But when somebody else came and said ‘we have this organization promoting African, Asian, Latin American literature and we need somebody with your background to follow a person who has left us, can you do it, do you want to do it?'"

Ripken did not hesitate.

Peter Ripken grew up reading German authors. But his interests broadened to other European and American literature. Then, he found what he calls books ‘outside of the norm.' This helped grow his interest in political developments in other regions.

"I read mostly novels. I started early reading African, Arab, Indian authors, Latin American authors.That was one thing, and going with it I had a strong interest in political developments in other continents. I'm especially interested in political developments in Africa and the Arab world. And I've made efforts to find out by traveling, by meeting people, by going to conferences. And these two elements have shaped my life." 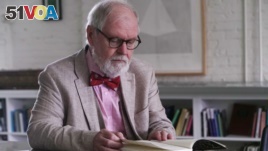 Peter Ripken has written one book himself. At the height of the anti-apartheid struggle, he wrote a handbook on Southern Africa. But poetry came along later for Ripken, and with a little pressure.

"I remember a Moroccan poet at one time told me, ‘You Europeans, you are doing everything to kill poetry.' And I wanted to prove to him that I was not killing poetry, so I read poetry and I edited anthologies."

Last year Peter Ripken retired after several years as ICORN's chairman. But he is still active in the organization. He and many others are developing relationships with new partners and supporters. The goal is to increase the group's capacity to protect and promote writers and artists at risk around the world. More than 60 cities have joined the network, and no less than 170 writers and artists have found shelter in an ICORN member city.

In 2016, International Cities of Refuge Network celebrated its 10-year anniversary.

And Ripken says he will continue to stay busy in the world of arts and literature.

"There's one project we are setting up a cultural center in southern Spain for encounters between writers and artists from Algeria, Tunisia, Morocco, Spain, France and Germany. I'm involved there. I'm involved in an information center in Southern Africa. I am preparing with a friend a handbook of African literature. And corresponding with people and, partly I must say, also traveling."

Peter Ripken hopes to be remembered as somebody who promoted creativity and supported literature as a political tool and source of enjoyment.

"At one time I was over political. For example, I read literature at a time as literature with a "brandish fist," as a political weapon. I looked at the content and it was only later that I discovered that literature in itself is pleasure. Reading can move you, enlighten you and to convey to others this notion that I think is what I believe is my main motivation. What makes me tick!"

Next time on People in America, meet Assal Ravandi, founder and president of the Academy of United States Veterans.

persecuted – v. to treat someone unfairly especially because of race or religious or political beliefs

obsession – n. an activity that someone is very interested in or spends a lot of time doing

bookseller – n. a person or company that sells books

stint – n. a period of time spent doing a certain job or activity

affinity - n. a liking for or an attraction to something

equivalent – adj. having the same value, use, meaning
promote – v. to help something happen, develop or increase

hesitate – v. without delay or doubts

varied – adj. having many forms or types: including many different things

outside of the norm – idiom exp. not normal, not common

nonfiction – n. writing that is about facts or real events

brandish fist – exp. Waving the hand with its fingers bent down into the palm in a threatening or excited manner

convey – v. to make something known to someone

notion – n. an idea or opinion