Renald Richard: At 92, a Life Filled with Music

Update Required To play the media you will need to either update your browser to a recent version or update your Flash plugin.
By Marsha James
10 May, 2017


"To be a musician, it's like fulfilling a part of your life that's irreplaceable. It's something that I enjoy and I love to do and I get a satisfaction from it."

That is Renald Richard. Born in 1925 in Thibodaux, Louisiana, just west of New Orleans, Richard's memories of childhood are filled with music. His father played piano by ear. His uncles and cousins all played instruments and sang. So at the age of six, Richard started piano lessons at home.

"I played partially by ear and I learned pieces on the piano like the boogie woogie and that kind of stuff, so I guess music was in my system."

Jam sessions were usual events at Richard's house when family stopped by. And that was more than fine with Richard.

"I just wanted to play music."

At the age of 13, Renald Richard went to see a band perform at a church dance. He noticed two young trumpet players in the band. He says they were dressed "clean and sharp." All the girls -- including his girlfriend -- fell for the trumpet players.

Richard knew he had to take action.

Renald Richard played the trumpet in the high school band. After high school, the government sent him into military service. He played his trumpet during his time in the United States Navy Band. Later, he performed while touring in a USO variety show. 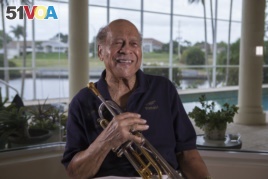 Richard thought he had learned enough from his time in the band and the USO show.

"I got an experience from that (which) lasted me a lifetime and I almost made a bad mistake because when I came out of the Navy I figured I knew it all. That was my education."

But, Richard ended up studying music at Xavier University of Louisiana in New Orleans. He played clubs on the city's famous Bourbon Street. He also toured with many bands including his family band, the Johnson Brothers, as well as Guitar Slim and Ivory Joe Hunter.

While playing in Houston, Texas in 1954, Richard was approached by Jeff Brown, the manager of musician Ray Charles.

"Ray Charles is forming a new band. He just got a hit record out and he would be interested in you playing trumpet in the band. Would you like to do that? Of course. Ray Charles. I said ‘yes'!"

"First of all, to be selected by Ray Charles was an honor to me. I was honored by that and a little nervous."

Ray Charles was exacting, says Richard, and he demanded the same from band members.

"He was a perfectionist and he was rather strict about his music."

Richard says over their years together he came to realize the genius of Ray Charles.

"It was like going to college with Ray Charles. I learned voicing and resolving notes. He would start with the baritone sax and then he would dictate every note like he's not using anything from memory like his Braille. He say alright, let's take the saxophone, let's take the trumpet or whatever. Everything is in his mind. So it really was educational."

Renald Richard toured all over the South and West with Ray Charles. Sitting in the back seat of the car on the way to a gig, Richard wrote the song "I Got a Woman" for Charles.

In 1954, Renald Richard left Ray Charles band. He was upset by the drug problems among band members.

"I knew that it would not be long before they would be what we call busted. And it did happen. And I wasn't quite ready for that."

Richard stayed friendly with Ray Charles over the years. He went back to his hometown and became the high school's band director until 1962. Four years later, he moved again, this time to New York City.

Over the years, Richard has written many other songs that have been recorded by artists including Joe Turner, the Beatles, the Rolling Stones and Elvis Presley to name a few.

I was thrilled when music artist Kanye West used "I Got a Woman" as the basis for his hit song "Gold Digger", Richard says.

The song was number one on the Billboard Charts for 16 consecutive weeks.

Renald Richard retired from teaching in 1991.

Living now in Southern Florida, Richard is still active at the age of 92.

"I'm playing music mainly with the Marco Island Strummers and I'm playing with the Jazz Masters in Naples, so I do a lot of playing and I enjoy that ."

As you can see Renald Richard's musical days are by no means near an end.

Irreplaceable – adj. too valuable or rare to be replaced

jam session – n. a gathering or performance in which musicians play together

fell for – idiom find someone attractive

approach - v. to start talking to someone for some purpose or to make a request

select - v. to choose someone from a group

perfectionist – n. a person who wants things to be done perfectly

dictate – v. to say or state something with authority or power

on the map – idiom make someone famous or popular