Update Required To play the media you will need to either update your browser to a recent version or update your Flash plugin.
By Marsha James
15 February, 2017


Tuhin Das is a writer, activist and poet. In a quiet, melodious voice, he shares a part of a poem.

"I don't know how I can express myself, as feelings become obtuse from fear. Soldiers of darkness caught me like an animal and butchered me in dreams. You know the feelings of dreaming are like reality. It is midnight in my Bangladesh."

Tuhin Das is from Bangladesh. But he lives now in exile. Forced to leave his home in April 2016, Tuhin Das sought refuge at City of Asylum Pittsburgh, a sanctuary for endangered writers.

"I left my country in an extreme situation and I came here not for only security; I came here for freedom, freedom of expression, freedom of writing and freedom for living a certain way." 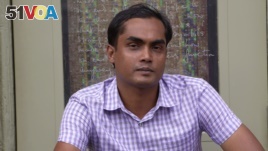 Born and raised in Barisal, Bangladesh, Tuhin Das loved to read poems. Tuhin began writing his own poems when he was in seventh grade. Some of his works were featured in a local children's magazine.

"Basically, I write poetry because that is my voice, my soul voice. I wrote a few rhymes, like children('s) poetry. They were published in children's magazines."

Tuhin Das says he continued with poetry but also started writing other things, like short stories. However, he says in the 1980s things changed in his country. A military dictator took control and established Islamic rule.

Tuhin Das says he began to write more serious articles as a witness to the rise of fundamentalism.

"When I started writing articles, basically our community in Bangladesh was ninety-four percent Muslims and they did not think [writing] is good because some feelings hurt them. I wrote against war crimes, some war criminals in our country, and they are still in our country and they are doing their job. They were never condemned, so for that, we wrote against them."

However, freedom of expression came at a cost for Tuhin Das.

"Right now there are local collaborators of 1971, and right now in our country there are a lot of their supporters. So, when we wrote against them and the supporters, sometimes online, they personally threatened us."

To save his own life, Tuhin Das left Bangladesh.

Since 2013, Das has been the target of fundamentalist groups who have murdered freethinking bloggers, writers and editors. In Bangladesh, writers are being persecuted under the country's Information and Technology Communication Law. Instead of protecting Tuhin, the police collected and searched his writings for anti-Islamic statements to use against him.

City of Asylum Pittsburgh has given exiled writer Tuhin Das a refuge.

Tuhin Das appreciates the community support he is receiving. He joined the Greater Pittsburgh Literary Society where he is learning the English language and about American culture.

His work has continued to appear in Bangladesh. In his native language, Bengali, Das has authored seven poetry books. He has served as editor of several literary magazines, written short stories and published columns in his home country. He says his proudest accomplishment is the founding of a popular magazine called, ‘The Wild.'

However, Tuhin Das says he misses his Bangladeshi home and hopes one day to return there.

"I love my country and also my family, my parents and my nephew and my sisters and a lot of friends. I think the situation of my country will be good and I will come back to my country. I hope that."

Next time on People in America, meet Peter Ripken, Board Chair of International Cities Of Refuge (ICORN)

melodious – adj. having a pleasing sound

sanctuary – n. a place where someone is protected or given shelter

fundamentalism – n. a form of religion especially Islam or Protestant, Christianity that upholds strict adherence to any set of basic ideas or principles

collaborator – n. a person who works with another person or group in order to achieve or do something

blogger – n. someone who writes about personal opinions, activities and experiences

persecuted – v. to treat someone cruelly or unfairly especially because of race or religious or political beliefs

appreciate – v. to be grateful for something

literary – adj. having a lot of knowledge about literature: known for reading or writing books

authored – v. to be the person of something, such as a book

column – n. an article in a newspaper or magazine that appears regularly and that is written by a particular writer or deals with a particular subject