Update Required To play the media you will need to either update your browser to a recent version or update your Flash plugin.
By Bryan Lynn
05 December 2022

A ceremony celebrating the artists was held at the John F. Kennedy Center for the Performing Arts in Washington D.C. The event just entered its 45th year.

U.S. President Joe Biden and Vice President Kamala Harris attended the gathering, along with cabinet members and leaders from Congress. 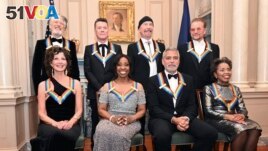 Before the event, Biden personally praised the honorees at a reception at the White House. He recognized the performers for their individual abilities and said the group represented the spirit of the whole country.

The show celebrated all the honorees' work, but none of them personally performed. Instead, other artists performed their works for the crowd.

Actor and filmmaker Clooney told reporters he felt especially honored because he used to watch the Kennedy Center Honors show on television while growing up in a small Kentucky town. He remembered seeing people like Jimmy Stewart and Robert Redford receive the award.

"That's an exciting fraternity to be a part of," Clooney said.

Actors Julia Roberts and Matt Damon joined Clooney's father Nick, and others, on the Kennedy Center's stage to honor him. "George's best and most important work is still ahead of him," Clooney's father said.

Six-time Grammy Award winner Grant told reporters before the event she felt honored to be chosen. But the singer added that she also felt "a debt of gratitude" for all the people who have worked together with her over the past 40 years.

"Everything takes a village," Grant said.

Singers Sheryl Crow, Brandi Carlile, CeCe Winans and BeBe Winans were among the artists who celebrated Grant with a selection of her songs.

Knight, who has won seven Grammy Awards, is famous for hits including I Heard It Through the Grapevine and Midnight Train to Georgia. She started out as the lead singer of The Pips, which became Gladys Knight & The Pips in 1962.

Rapper and actor LL Cool J said Knight "connects with you on a deeper, spiritual level." Singers including Garth Brooks and Patti LaBelle performed some of Knight's songs.

Cuban-born León is a conductor as well as a composer. Her orchestral piece Stride won the 2021 Pulitzer Prize in Music.

The final tribute of the evening went to the Irish band U2. The group – with members Bono, The Edge, Adam Clayton and Larry Mullen Jr. – has won 22 Grammy Awards. U2 was selected in 2005 for inclusion in the Rock and Roll Hall of Fame.

In a pre-recorded video, U2 guitarist The Edge noted that a group of four "Irish lads" were being honored for contributions to American culture. He noted that there is a strong connection between the group and America that cannot really be explained.

Pearl Jam's Eddie Vedder sang U2's Elevation and One. Comedy actor Sacha Baron Cohen brought his movie character Borat to the stage as part of the U2 tribute. American singer Brandi Carlile, Irish artist Hozier and Ukrainian singer Jamala closed out the show with an emotional version of U2's Walk On.

The Kennedy Center Honors show will be broadcast on the American television network CBS on December 28.

composer – n. someone who writes music

fraternity – n. a feeling of friendship between people

conductor – n. someone who stands in front of a group of musicians or singers and leads their performance

orchestra – n. a large group of musicians who play different instruments together

inspire – v. to make someone feel that they want to do something and can do it

contribution – n. something you do to help produce or develop something