Update Required To play the media you will need to either update your browser to a recent version or update your Flash plugin.
By Jim Dresbach
10 June, 2016


Four new chemical elements have been officially added to the periodic table.

The International Union of Pure and Applied Chemistry announced names of the new elements earlier this week. They are Nihonium (Nh), Moscovium (Mc), Tennessine (Ts), and Oganesson (Og).

The names were chosen by the scientists who discovered them. All of the elements are man-made, created in labs by nuclear researchers. Those researchers are from Japan, Russia and the United States. 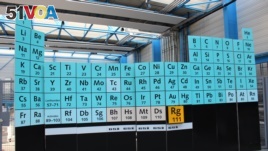 Four new elements have been added to the periodic table.

Tennessine is named after the American state of Tennessee. American researchers named the new element. They work for Oak Ridge National Laboratory and Vanderbilt University, both of which are based in the state.

A group of Japanese researchers came up with the name for the fourth new element, Nihonium. The word "Nihon" means Japan in Japanese.

Elements can be named for an idea or character in mythology, a mineral, a place, a scientist or a property of the element.

The chemistry union usually likes names that are easy to translate across major languages. The names must have endings like "-ium," "-ine" or "-on," depending on the grouping of elements they belong to.

The four new names will now be under consideration for five months to give time for any possible objections.

This story first appeared on VOANews. Jim Dresbach adapted the report for Learning English. George Grow was the editor.

What are your memories of studying the periodic table? We want to hear from you. Write to us in the Comments Section or visit our 51VOA.COM.

mythology – n. the myths of a particular group or culture

translate – v. to change words from one language into another