Update Required To play the media you will need to either update your browser to a recent version or update your Flash plugin.
By Carolyn Nicander Mohr
22 March, 2017


The media streaming business Netflix is changing how users can rate and find shows. The new method is designed to better connect viewers with shows they might like. The changes may save you some time as you binge-watch your favorite shows.

No longer will users be able to use stars (*****) to rate what they watch on Netflix.

The update changes user ratings to a Thumbs Up or Thumbs Down system. This makes it simpler for viewers to post ratings and is similar to YouTube ratings. 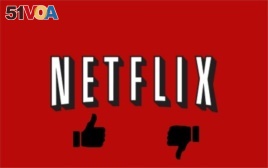 The company has been testing the new up or down system with hundreds of thousands of users around the world.

Results showed that viewers were 200% more likely to rate a show with a thumbs up or thumbs down system than a five-star scale. Netflix wants to encourage more viewers to rate shows. So, it went with the up or down system.

Netflix also hopes that the up and down ratings will better predict which shows viewers enjoy. The company discovered that viewers' star ratings did not indicate what shows they were more likely to watch.

For example, many viewers rated documentaries higher than comedy shows, although they watched comedies more often. With the five-star rating system, viewers seemed to be rating whether others would enjoy a show, but with the up and down ratings they voted on what they liked themselves.

The update also changes how Netflix suggests shows for users, based on their past likes and ratings.

Netflix will use a percentage measure to indicate how closely a show matches a user's preferences. If you see a "95%" next to a listed show, Netflix is almost certain you will enjoy it. On the other hand, you might want to ignore a movie rated as a 50% match.

This update will begin in April and be available to users over the next few months.

Netflix is also currently testing a "Skip Intro" button that lets users fast-forward through opening credits of a show. If you are a binge-watcher you are likely to enjoy this new feature.

Some Netflix viewers have already seen the Skip Intro button on original Netflix series and on other television shows, when watching Netflix on their computers.

Of course, you are still free watch the intro if you would like. The "Skip Intro" button is optional.

Would you be more likely to give a show a star rating or a thumbs up or down rating? Do you like the new matching feature on Netflix?

Share your thoughts in the Comments Section below or on our 51VOA.COM.

scale - n. a range of numbers that is used to show the size, strength, or quality of something?

encourage - v. to make (something) more appealing or more likely to happen

indicate - v. to show that (something) exists or is true

documentary - n. a movie or television program that tells the facts about actual people and events

percentage - n. a number or rate that is expressed as a certain number of parts of something divided into 100 parts

match - v. to be suited to (someone or something)

intro - n. a short introduction to something (such as a performance or a musical work)

credits - n. (plural) a list of the names of the people who have worked on or performed in a movie, television program, etc.