Update Required To play the media you will need to either update your browser to a recent version or update your Flash plugin.
By Bryan Lynn
20 September 2021

The company said Monday it will seek U.S. approval for the shot to be used in children in this age group as soon as possible. Pfizer developed the vaccine jointly with its German partner BioNTech.

Last month, the U.S. Food and Drug Administration, or FDA, gave full approval to the Pfizer-BioNTech vaccine to be used in all individuals over the age of 16. The vaccine has also been available under emergency use for people 12 to 15 years old.

In trials involving 5- to 11-year-olds, Pfizer tested a smaller dose, about one third the amount given in current shots. Pfizer officials said with the smaller dose, children ages 5 to 11 still developed coronavirus-fighting antibody levels just as strong as teenagers and young adults getting full-strength injections.

The children's dosage was also shown to be safe, causing similar or fewer temporary side effects than experienced by teens, Pfizer senior vice president Dr. Bill Gruber told The Associated Press. Such effects can include pain in the arm, fever and body aches. 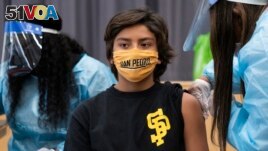 Gruber, who specializes in child medical care, said researchers "really hit the sweet spot" with the latest vaccine. He added that Pfizer and BioNTech aim to seek emergency approval from the FDA by the end of the month for use in this age group. They also plan to seek government approval in the European Union and Britain.

Earlier this month, FDA chief Dr. Peter Marks said once Pfizer provided its results, his agency would examine the data "in a matter of weeks" to consider approval of the vaccine.

Pfizer said it studied the lower dose of the two-shot vaccine in more than 2,200 children aged 5-11. The FDA only required what is called a "bridging study" to be carried out. The study aimed to find out whether the younger children developed antibody levels already proven to be protective in teens and adults.

Pfizer and BioNTech announced the findings Monday in a news release, while noting that the study is still going on. Researchers said there have not yet been enough COVID-19 cases to compare rates of effectiveness between the vaccinated and those given a placebo. That data is expected to provide additional results.

Both the Pfizer vaccine and another one developed by Moderna have been linked to rare cases of heart inflammation in teens and young adults, mostly in young men. But Pfizer said the researchers did not see such cases in the new trial.

Moderna is also studying its shots in younger school-aged children. And both Pfizer and Moderna are studying vaccine use for babies as young as 6 months old. Those results are expected later in the year.

Children generally face a lower risk of severe illness or death from COVID-19 than older people. However, more than 5 million children in the U.S. have tested positive for COVID-19 since the pandemic began and at least 460 have died, the American Academy of Pediatrics reports. Cases in children have risen as the Delta version has spread across the country in recent months.

Health experts say quick emergency approval of the vaccine could help prevent the possibility of a large rise in infections in the autumn, especially with schools already open nationwide.

An outside expert said scientists are awaiting more details but see the results as encouraging. "These topline results are very good news," said Dr. Jesse Goodman of Georgetown University, a former FDA vaccine chief. He added that the level of immune response Pfizer reported "appears likely to be protective."

The Associated Press and Reuters reported this story. Bryan Lynn adapted the reports for VOA Learning English. Hai Do was the editor.

inflammation – n. a red, swollen area in or on part of the body

encourage – v. to talk or behave in a way that gives someone confidence to do something

immunity – n. to be protected against catching a disease