Update Required To play the media you will need to either update your browser to a recent version or update your Flash plugin.
By Hai Do
05 November 2021

The American drug-maker said a group of independent scientists observing the study advised halting it early based on the strength of its results. 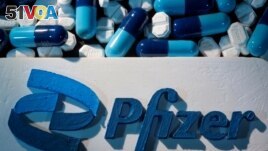 FILE - A Pfizer logo is placed near medicines from the same manufacturer in this illustration taken September 29, 2021. (REUTERS/Dado Ruvic/Illustration/File Photo)

Pfizer's study was stopped when 774 adults had been treated for 28 days. Among those who received the Pfizer pill and older antiviral drug ritonavir, three were hospitalized and no one died. Among those who took an inactive substance, or placebo, there were 27 hospitalizations with seven deaths.

Pfizer said adults in the study were considered high risk for hospitalization. They were unvaccinated and showed signs, or symptoms, of mild to moderate COVID-19. The study shows an 89 percent reduction among patients treated within three days of showing symptoms.

A larger study of 1219 people also shows an 85 percent reduction among those treated within five days. In that study, six people who received the Pfizer medication were hospitalized. No one in that group died. There were 41 hospitalizations and 10 deaths in the placebo group.

Pfizer's chief scientific officer, Dr. Mikael Dolsten, told the Associated Press, "We were hoping that we had something extraordinary, but it's rare that you see great drugs come through with almost 90 percent efficacy and 100 percent protection for death."

Pfizer said it will present the results to the U.S. Food and Drug Administration, or FDA. The company said it will ask the FDA and international health officials to approve the pill as soon as possible. The treatment, called Paxlovid, consists of three pills given twice a day for five days.

Last month, drugmaker Merck announced study results of an antiviral pill it produced. It cut rates of hospitalization and death by 50 percent. This week, Britain approved that pill for emergency use. The FDA is currently considering whether to approve it for emergency use in the U.S.

Although Merck's pill, called molnupiravir, is further along in the emergency approval process, Pfizer's drug is more familiar to health officials.

Pfizer's pill comes from a family of antiviral drugs used in the treatment of HIV and hepatitis. The drug was first identified during the SARS outbreak in Asia in 2003. Last year, Pfizer researchers started studying it for COVID-19.

The FDA has already approved several treatments for COVID-19. But all of them must be injected by healthcare workers. Pills can be taken at home and are easier to send around the world.

pill - n. a small object that you swallow that contains medicine, drug, etc..

placebo - n. a pill that is given to a patient like a drug but that has no effect on the patient