Update Required To play the media you will need to either update your browser to a recent version or update your Flash plugin.
By Anna Matteo
29 May 2022


The drug company Pfizer will make all of its patented medicines available at a not-for-profit price to 45 of the poorest countries.

The company announced the effort at the recent World Economic Forum in Davos, Switzerland. Pfizer is calling it "An Accord for a Healthier World." It said new medicines and vaccines would be added to the list at not-for-profit prices when they are launched.

The drugs include COVID-19 treatment Paxlovid and breast cancer drug Ibrance, the drugmaker said on Wednesday. 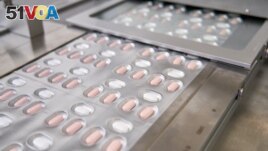 Pfizer's coronavirus disease (COVID-19) pill Paxlovid is packaged in Ascoli, Italy, in this undated image obtained by Reuters on Nov. 16, 2021.

The COVID-19 vaccine Comirnaty developed with the German company BioNTech is also on the list.

Pfizer's Chief Executive Officer Albert Bourla said that all the medicines being made available should be of use. "But clearly the antiviral Paxlovid is going to be a very big deal for them - if they need it they can get it immediately," he said.

Malawi's President Lazarus Chakwera made a statement about the agreement. He said it will let the countries and the drugmaker share "the burden of costs and tasks in the production and delivery of supplies that will save millions of lives."

Pfizer has been criticized for how it made its COVID-19 vaccine available. Some poor countries waited for months after the approval of the vaccine in rich countries.

Bourla said the new agreement uses information learned during the release of the vaccine. He added that the lack of health systems in some countries made providing the vaccine to people who needed it difficult.

To avoid that, Bourla said the agreement not only supplies the treatments, it will also help organize a system to administer them.

patented –adj. describing a product whose sales are protected by a patent: a document giving its owner the right to sell a product for an amount of time and which bars others from copying it without permission

inflammatory –adj. causing tissue in the body to increase in size or become red and painful

burden –n. a cost in money or effort

delivery –n. the process of taking something where it is meant to go