Update Required To play the media you will need to either update your browser to a recent version or update your Flash plugin.
By Hai Do
09 June 2022


The PGA Tour, the sports organization that runs golf events for professionals, mostly in the United States, has suspended all golfers who joined LIV Golf events.

PGA Tour Commissioner Jay Monahan sent a letter on Thursday to the members. It said that those golfers will not be permitted to play in any PGA Tour events. 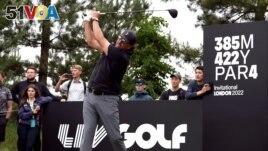 Phil Mickelson of the U.S. hits off the tee in the first round of LIV Golf Invitational at the Centurion Club in Britain on June 9, 2022. (Action Images via Reuters/Paul Childs)

The announcement came as several well-known golfers said on Wednesday that they would play in the LIV Golf Invitational Series. Among them were Dustin Johnson and Phil Mickelson. Johnson was a former world number one player and Mickelson has won six major championships along with 45 PGA Tour events.

"These players have made their choice for their own financial-based reasons," Monahan wrote. "But they can't demand the same PGA Tour membership benefits, considerations, opportunities..."

LIV Golf said the PGA Tour's decision "is vindictive and it deepens the divide between the Tour and its members." The group added, "This certainly is not the last word on this topic. The era of free agency is beginning as we are proud to have a full field of players joining us in London, and beyond."

Money is at the center

Money is the center of the dispute between the PGA Tour and some of the players.

PGA Tour players usually receive three releases a year to play in overseas tournaments. But Monahan denied the releases for the LIV Golf Invitational competition because it is an eight-tournament series that has five events in the United States. The tour does not permit releases for events in North America.

The first of eight LIV Golf events is being held at Centurion Club this week outside of London. There is $25 million in prize money, including $4 million for the winner of each event.

Well-known players like Mickelson and Johnson reportedly have received additional money for competing in LIV Golf. The Daily Telegraph newspaper reported that Johnson received $150 million just for signing up. That is more than Tiger Woods' career PGA Tour earnings. Mickelson did not deny reports that he got $200 million.

Human rights activists say LIV Golf is an example of "sportswashing." The term is used to describe how a country tries to improve its image by setting up sporting events with well-known sports competitors.

Sacha Deshmukh is head of Amnesty International UK. He said, "Rather than acting as the willing stooges of Saudi sportswashing, we'd like to see golfers at the LIV Golf Invitational speaking out about human rights abuses in Saudi Arabia."

The first reports that Mickelson would compete in the Saudi-backed event came out in February. At the time, he said: "I'm certainly aware of what has happened with Jamal Khashoggi, and I think it's terrible. I've also seen the good that the game of golf has done throughout history."

Khashoggi was a writer and critic of Saudi Crown Prince Mohammed bin Salman. He was killed on October 2, 2018, at the Saudi Consulate in Istanbul. Turkish officials said that Khashoggi was killed and then cut into pieces by security officers and individuals who worked for the crown prince. The prince also heads Saudi Arabia's state investment arm which supports LIV Golf.

However, Mickelson, Johnson and several others are welcome to play at the U.S. Open to be held near Boston next week. The U.S. Open is one of golf's four major championships. It is independent and open to all golfers who qualify.

Hai Do wrote this report for VOA Learning English with additional reporting from Reuters and The Associated Press.

benefits –n. (pl.) extra things given by an employer in addition to regular pay

vindictive –adj. having or showing the desire to hurt someone who has hurt or caused problems for you

topic –n. something that people talk or write about; a subject

release –n. permission to be freed from a normal responsibility usually called for by a contract