Update Required To play the media you will need to either update your browser to a recent version or update your Flash plugin.
By VOA
18 July, 2014

That's old time American music to celebrate an anniversary -- for a house. Pharsalia Plantation is on a beautiful mountain country road in Virginia. You can understand why Thomas Massie decided to build the house there in 1814. He built it on a farm in the Appalachian Mountains, about here hours from Washington, D.C. Thomas Massie gave it to his son William 200 years ago as a wedding present.

Recently, artists and musicians gathered at Pharsalia. They were celebrating the anniversary, and remembering what life was like in the 1800s.

The path is covered with small stones. Taking that walk is like stepping back in time. Many of the old buildings are still there. And they are still in good condition. There were demonstrations at the celebration, like the man shooting a gun from that time.

A blacksmith making tools by heating metal over fire. 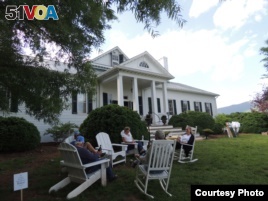 Pharsalia Plantation was built in 1814 by Thomas Massie.

A cider press making apple juice on a windy day.

Patsy Meyer, from nearby Lynchburg, Virginia, explained the American art of making a kind of bed cover, called a quilt.

"In the beginning it was an early part of our country. It was all for the need of having warm things to sleep under and so often old clothes would go into making the quilt. The top is a piece, is a fabric that we have pieced into designs to be real pretty."

A local band, "Nina Pinto and the Santa Marias", played a lot of American music with stringed instruments, fiddles and banjos. Both are popular American instruments. Banjos are round with strings that extend up a long arm.

Listen for Jim Robertson, who lives nearby, playing a set of bones with the banjo.

Rachel Deddens, from Lynchburg, Virginia, was cooking in the old kitchen. It was in its own building, outside the house. The cook from Pharsalia would have used the large open fireplace to make meals for many people. Rachel Deddens calls it "amazing" because of all the work that was done there, mostly by women slaves.

"Some of these people could read, but many of them couldn't, and they just had this knowledge in their head."

"It's really peaceful. It's just we belong." 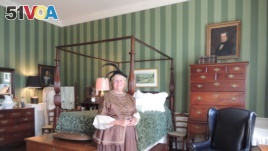 Once 10,000 acres, with four farms, Pharsalia is now just over 20 acres. William Massie owned 170 slaves who worked the plantation. They tried growing new things, like cranberries. Now, the Morgans are growing flowers. Foxie Morgan says it's not easy keeping up the plantation.

She calls her great-great grandfather a "risk-taker." She says not only did he try new things, he left many writings about life at Pharsalia.

"There's so much, he complains about his children and how fast they're driving the horses. And it's the same thing you might say today about your teenagers, you know, just with a different twist."(.06)

"Supposedly George Washington proposed to her and she turned him down and called him a country bumpkin."

Asked about stories that ghosts, or spirits of the dead, live there, Foxie Morgan answers this way:

"I don't know about ghosts, but there are definitely spirits here, and there are good vibes."

She says she doesn't know exactly who the spirits are, but adds:

"They're just caretakers to make sure we're doing right."

For the Morgan family, doing right means taking care of the farm and all the buildings. They hope that in another 100 years it will still be there for people to enjoy.