Update Required To play the media you will need to either update your browser to a recent version or update your Flash plugin.
By Bryan Lynn
13 November 2021


Parents in the Philippines are finding some creative ways to get their children outside to play as pandemic restrictions continue.

One of those children is two-year-old Nathania Ysobel Alesna. On a recent day in the capital Manila, Nathania played outside her home for the first time in her life. Government-ordered coronavirus restrictions had kept her inside for the past 20 months. 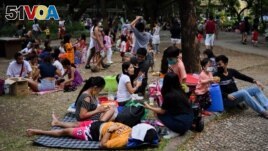 Nathania rode a bicycle as her mother, Ruth Francine Faller, looked on.

Faller told Reuters her daughter experienced "overflowing" joy at getting to play outdoors. "She looks innocent and at the same time amazed at what she saw," Faller said.

Later, Faller shared the experience online with a Facebook group that includes other parents in the area. The group is designed to help parents find places where their children can spend time outdoors or in public places without getting in trouble with police.

For many of the 40 million Filipinos under the age of 18, the COVID-19 pandemic has been a continuous lockdown. This is because the government considers children a particularly high-risk group. Few other countries consider children high-risk.

After 20 months, hundreds of thousands of parents are turning to social media to find safe areas for their children outside the home. The parents worry about how such long-term stay-at-home orders will affect the mental health of their children.

The Facebook group is called "Kids Are Allowed." It aims to find creative ways to treat play as exercise and identify public spaces where enforcement is not as strong.

The group was set up in March by Hershey May Avillo-Parcarey. It has grown quickly. She told Reuters she gets up to 5,000 requests a day to join the group. The group now has around 200,000 members. Similar groups have also been created.

The nationwide policy, ordered by President Rodrigo Duterte, bans minors from outdoor areas and public spaces. But the rules are enforced unevenly. There is an exception that permits minors to be outside if they are exercising.

The Philippine government repeated in late October that at-risk groups, including children, are still under stay-at-home orders.

Some businesses have faced government action for accepting children. But officials in some areas recognize that parents are growing tired of restrictions and sometimes overlook violations.