Update Required To play the media you will need to either update your browser to a recent version or update your Flash plugin.
By Bruce Alpert
11 June, 2016


The Philippine president-elect has a new program to fight crime.

In a speech, he said people with guns should shoot and kill drug dealers who refuse to be taken to a police station. The same is true, he said, if drug dealers threaten people with a gun or a knife. 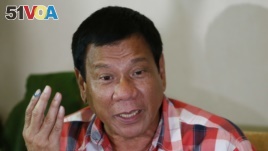 Rodrigo Duterte speaking after voting in the Philippine presidential race, which he won. The president-elect is now calling on citizens to take crime into their own hands, and shoot drug dealers if they refuse to be taken to police headquarters or threaten them with knives or guns. (AP Photo/Bullit Marquez)

"Please feel free to call us, the police, or do it yourself if you have a gun ... you have my support," Duterte said. "Shoot him, and I'll give you a medal."

His speech was reported on by the Associated Press.

Duterte won the May 9 presidential election on a promise to end crime and corruption within six months of taking office.

But his tough talk during and immediately after the presidential election has alarmed some. Human rights groups said that citizens could use the president's words to kill people they don't like by saying they were drug dealers.

Rafendi Djamin is Amnesty International's Director for South East Asia and the Pacific. "As leader of the Philippines, the president-elect must protect and uphold human rights, not reject them," he said. "That includes the right to life, due process and fair trial."

As the longtime mayor of Davao City, Duterte put in tough penalties for crime. But Human Rights Watch said he went too far, using death squads to kill more than 1,000 people.

Bruce Alpert wrote this story for VOA Learning English. His report was based on a story from the Associated Press and statements by Amnesty International. Kathleen Struck was the editor.

Write to us in the Comments Section, and share your views on 51VOA.COM.

medal – n. a piece of metal often in the form of a coin with designs and words in honor of a special event, a person, or an achievement want to hear from you.

alarm – v. to worry someone

uphold – v. to support or defend something or someone

squad – n. a part of a police force that deals with a specific type of crime