Philippine officials say reports that the Islamic State group is actively seeking members in the country have yet to be confirmed. But officials are watching the situation closely. They fear that some Filipinos could be persuaded to join the group.

Oscar Valenzuela is assistant secretary of the Philippines Anti-Terrorism Council. He says there are several reasons the country is at risk from Islamic State militants. For example, it is difficult to guard the southern provinces. Mr. Valenzuela says the government does not have the forces needed to do so. And he says the militants have used social media effectively in their efforts to win supporters. He notes that two million Filipinos work overseas -- some of them near areas where the Islamic State operate.

"We have lots of Filipinos in the Middle East and, of course, we consider them one of the exposed sectors."

Mr. Valenzuela says the workers could be persuaded to join the Islamic State by its wealth. Some of the money comes from the oil production centers it seized in Iraq and Syria. 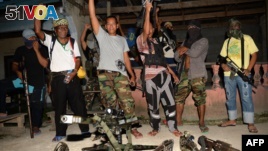 The Islamic State group wants to establish an extreme form of Islamic rule in areas under its control. Media reports say the group has between 30,000 and 80,000 members.

Some officials say Islamic State fighters are seeking to win followers in the southern Philippines. But observers and military officials say they cannot confirm those reports. They also say they have no confirmation that members of the group are even in the country.

Joselito Kakilala is a Philippine army general. He says security officials are watching for evidence of the Islamic State actively seeking new members. He says the group could influence extremists in the country, and harm government efforts to bring peace in the southern Philippines.

Most of the country's Muslims live on the southern island of Mindanao. Earlier this year, the largest Muslim rebel group reached an agreement with the government to end 40 years of conflict. But smaller groups are not supporting the agreement. Officials say it is from these groups that the Islamic State could gain new members.

Mohagher Iqbal was the main peace negotiator for the largest rebel group, the Moro Islamic Liberation Front. He says his group does not want to work with the Islamic State. And he does not believe any efforts on its part to win supporters in the Philippines would be successful.

The Bangsamoro Islamic Freedom Fighters is one group that did not support the peace agreement with the Philippine government. Last month, the group promised to support the Islamic State militants.

Oscar Valenzuela of the Anti-Terrorism Council says the Philippines has tightened restrictions on people entering and leaving the country. He adds that in recent months the government arrested and then expelled an Australian and a Canadian from the country. They reportedly were wanted overseas for urging others to support extremist jihadist teachings.

This report was based on a story from reporter Simone Orendain in Manila. Christopher Cruise wrote it for Learning English. The editor was George Grow.

persuade – v. to cause someone to do something by asking, arguing, or giving reasons

province – n. one of the large parts that some countries are divided into

conflict – n. a struggle for power or property

agreement – n. an arrangement by which people agree about what is to be done

convince – v. to cause someone to agree to do something