Update Required To play the media you will need to either update your browser to a recent version or update your Flash plugin.
By Jim Dresbach
23 July, 2016


Philippine President Rodrigo Duterte has issued an order directing the Philippine people to address him simply as "president."

Duterte's executive order banned the use of honorifics for himself or his cabinet. Honorifics are titles or terms of respect.

Duterte approved the executive order on July 15. The order was issued to stop the use of terms such as "honorable" or "his excellency." While Duterte will be called "president," the order suggests the term "secretary" be used for the country's ministers.

Duterte's officials say the order is a step aimed to reinforce the president's "simple" style.

Though he will formally be addressed as president, Duterte still prefers to be called "mayor," according to a statement from the president's staff. 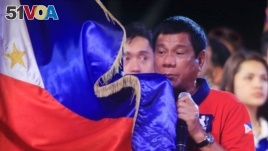 For more than two decades, Duterte was the mayor of southern Davao City. There, he became an admired public servant and crime-fighter.

The order will not surprise the millions of Filipinos who voted for Duterte. He became popular due to his down-to-earth style and clothing.

However, the Duterte administration did make a change to the event. The budget has been reduced for this year's State of the Nation address. This year's event will have fewer guests and a business dress code.

Reuters contributed to this VOA News story. Jim Dresbach adapted it for Learning English. Kelly Jean Kelly was the editor.

honorifics – n. titles used in speaking to or about a superior or elder

executive order – n. an order that comes from a president or a government agency and must be obeyed like a law

excellency – n. used as a title for some high government officials

populist – adj. relating to a political party that claims to represent ordinary people

fashion show – n. an event at which newly designed clothing are modeled for an audience