Update Required To play the media you will need to either update your browser to a recent version or update your Flash plugin.
By George Grow
21 April, 2015


The United States and the Philippines launched joint military exercises on Monday. The exercises involve a larger than usual number of Philippine and U.S. troops. The training operations come at a time of new expressions of concern about Chinese activities in the South China Sea.

Philippine and American officers gathered at the Philippine military headquarters in Manila. The officers said the joint exercises are larger and "more complex" than in years past. The exercises involve a little more than 5,000 Philippine troops and about 6,500 U.S. troops.

Philippine General Rodolfo Santiago is assistant director of the exercises. He noted that only 6,000 to 8,000 troops usually took part in other years. 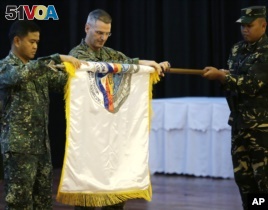 "But if you'll see that the trend, it is really increasing every year.

U.S. General Christopher Mahoney says the exercises are more complex than in the past. He says they involve bringing land and sea forces together for training on amphibious landings. He says the troops are also taking part in ‘live fire' drills and receiving training on intelligence gathering.

This year was supposed to mark the start of a new defense agreement between the two countries. The Enhanced Defense Cooperation Agreement was signed in April of 2014. Under the deal, the U.S. military would have permission to send more troops to the Philippines and position military equipment at some bases there. But the treaty is not being enforced because of questions about its constitutionality. The Philippines high court is considering the issue.

Philippine National Defense Secretary Voltaire Gazmin noted the delay during a speech at the opening ceremony.

"We shall undertake this exercise as we work towards operationalizing, if permitted by our Supreme Court, the Enhanced Defense Cooperation Agreement..."

A Philippine Armed Forces spokesman told VOA that there were activities the military would have wanted to include in the exercises if not for the court case.

Carl Baker is with the Pacific Forum of the Center for Strategic and International Studies in Washington, D.C. He says even without the agreement in force, both countries are still able to work together.

"The real shift, and probably why they're bringing in more troops, is the United States and the Philippines have both said it's important to demonstrate that the Philippines is shifting its focus from internal to external defense."

The agreement reinforces President Barack Obama's effort to ‘rebalance' toward Asia. Military officials from both countries say the exercises do not target any one country. But Carl Baker calls the increased troops levels a "low-key response, without being overly provocative" to Chinese aggression in the South China Sea.

China has become more active in the disputed waters in recent years. The Philippines, Vietnam, Brunei, Malaysia and Taiwan also have made territorial claims in the area. 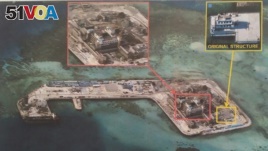 Most recently, China has taken steps to control seven disputed coral reefs in the Spratley Islands. The Philippines also claims the reefs.

Hours before the opening of the exercises, Philippine Armed Forces Chief General Gregorio Pio Catapang released photographs of the area. He said were taken April 11th.

The main concerns for the Philippines are the two reefs where runways are taking shape.

The Chinese government has said its efforts to reclaim territory are not targeted at any one country. China also says it has rights to build on its sovereign territory. China says the development is for civilian needs and what it calls "the need for necessary military defense."

This report was based on a story from reporter Simone Orendain in Manila. George Grow wrote it for Learning English. Caty Weaver was the editor.

troop – n. a number of soldiers in a large controlled group

concern – n. interest, worry
headquarters – n. the center from which orders are given; the main offices of a business or organization

complex – adj. of or having many parts that are difficult to understand; not simple