Update Required To play the media you will need to either update your browser to a recent version or update your Flash plugin.
By VOA
24 March, 2014

Some farmers in the central Philippines are preparing for their first rice harvest since a powerful typhoon hit the country. Typhoon Haiyan caused major damage over a wide area and destroyed homes. The storm killed more than 6,000 people.

Florencio de la Cruz remembers typhoon Haiyan. He says he had harvested six tons of rice less than two weeks before the storm hit. Strong winds blew off the top of the storehouse where he kept his rice. Heavy rain nearly destroyed his harvest. However, the sun helped dry some of the crop and he was able to recover a little. 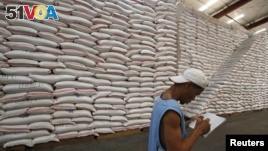 Late last year Florencio de la Cruz received rice seeds from the United Nations' Food and Agriculture Organization. The FAO helped start the planting season in the central Philippines. More than two thirds of the local population lives in poverty. Mr De la Cruz says, nothing would have happened without the seed program. He expects to harvest the new crop on March 28.

Last year, officials said 63,000 hectares of rice had to be replanted after Haiyan struck. In 2012, another storm reduced the government's supply of seed. Philippine officials say the FAO donated 52 percent of the required seeds. The international community donated another 28 percent. The rest came from the Philippine government.

Graziano da Silva is the Director of the FAO. Earlier this month, He inspected the seed program in the area where Florencio de la Cruz lives.

Mr da Silva says the farmers are receiving what he calls "certified quality" seeds. He says these seeds should produce more crops than the seeds farmers have now. But he says the first group of seeds was provided under less than perfect conditions.

"Remember the typhoon came exactly in the moment that was close in the time for another planting and we needed to do it in a week, two weeks and we did it. The most import is the result would be zero if we did not provide those," he said.

Mr Da Silva say the reaction of the international community and agencies in the Philippines was one of the quickest he has seen. He says the next step is to make sure the farmers get a fair price for their rice crops. He believes that this might influence them to plant even more.

The trees will need at least four years before they can produce fruit. For now, the agencies plan to help coconut farmers plant fast-growing crops like cassava and white corn.