Update Required To play the media you will need to either update your browser to a recent version or update your Flash plugin.
By Jim Dresbach
09 May, 2016

Duterte is the long-serving mayor of the city of Davao. He was leading in public opinion surveys by as much as 10 percentage points over his closest competitors, Senator Grace Poe and Interior Secretary Manuel Roxas. Roxas had the support of current President Benigno Aquino, who is leaving office.

Voter turnout was expected to be close to 80 percent in the election. 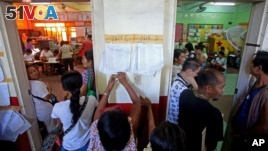 Filipinos check for their names on registration lists to vote as polling stations prepare to close at a school in suburban Manila, Philippines on Monday, May 9, 2016. Millions of Filipinos went to election centers Monday to pick a new president, vice president and thousands of other officials amid tight security across the country. (AP Photo/Lino Escandor II)

Duterte is 71 years old. He has gained support with his sometimes offensive speeches, in which he made promises to fight crime and corruption and to execute criminals. With his offensive language and open discussion of sexual activity, he has drawn comparisons to U.S. presidential candidate Donald Trump.

Senator Poe was another key candidate. She is 47 years old. Her campaign slogan was "government with a heart."

As she cast her vote at a Manila-area elementary school Monday, she was surrounded by supporters and members of the media. She told the media she offered her choice to God, her father and her countrymen.

Poe's father was the local action film star Fernando Poe Jr. He ran for president in 2004 and narrowly lost.

Outside the Manila school, retiree Freddy Flores said he voted for Poe. Flores said his main concern for the Philippines was the dispute with China over territory in the South China Sea.

"For the security of the country, of course, it's better if you can blend well and have diplomacy. You can't just be tough," he said.

Flores said he worried about his children's future. He feared Duterte, with his tough talk, could cause the Philippines to be "wiped out" by China.

Duterte has said that as president he would ride a Jet Ski to the Scarborough Shoal. The area is part of the contested territory in the South China Sea. Duterte told voters he would plant a Philippine flag and expect to die a hero at the hands of the Chinese.

Ferdinand Marcos Jr., son of the former Filipino dictator, is a candidate in the race for vice president. He has led in public opinion surveys against five other candidates.

Boxing star Manny Pacquiao is a candidate for the senate.

The military of the Philippines said it has witnessed shootings, explosions and other violent acts. The violence has resulted in 10 deaths and three injuries in western Mindanao, the central Philippines and Luzon Island.

An election poll-monitoring group supported by the Roman Catholic Church said it told volunteers in some provinces to leave. Those volunteers left for their safety after they observed cheating.

Ramon Casiple is the executive director of the Manila-based Institute for Political and Electoral Reform. He said this election may be having more problems because of the high number of registered voters. Nearly 54 million citizens of the Philippines have registered to vote.

Casiple said he is trying to determine whether or not stories of election cheating are widespread. He called the races for top offices "hotly contested." He said that if the "process is compromised" by cheating, "that would mean the failure of democracy."

Simone Orendain in Manila reported this story for VOANews. Jim Dresbach adapted her report for Learning English. Ashley Thompson was the editor.

What do you think about the presidential election in the Philippines? We want to hear from you. Write to us in the Comments Section or visit our 51VOA.COM.

polls – n. the places where people vote during an election

turnout – n. the number of people who go to or participate in something

Jet Ski – n. a small and fast vehicle that is used on water and carries one or two people