Update Required To play the media you will need to either update your browser to a recent version or update your Flash plugin.
By Alice Bryant
09 January, 2019


Rising rates of depression among American teenagers and young adults have led to a major question: Could the same devices being blamed for causing depression be used to find it?

Studies have linked heavy smartphone use with worsening teen mental health. But as teens spend time on sites like Instagram, Snapchat and YouTube, they also leave digital paths that may offer signs about their mental wellbeing.

There are more than 1,000 smartphone "biomarkers," said Dr. Thomas Insel. He is former head of the National Institute of Mental Health. He has become a leader in the smartphone psychiatry movement.

Researchers are testing smartphone apps that use artificial intelligence, or AI, to predict depression and possible self-harm.

But there are still issues to address, including privacy issues and making sure children give permission to be closely followed.

Using smartphones as mental health detectors would require permission from users to download an app. They could take back their permission at any time.

Nick Allen is a psychologist at the University of Oregon. He is one of the creators of an app being tested on young people who have attempted suicide. 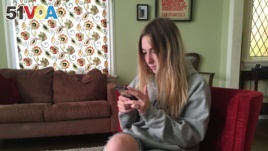 In this Nov. 1, 2018 photo, Laurel Foster holds her phone in San Francisco. Foster is among teens involved in Stanford University research testing whether smartphones can be used to help detect depression and potential self-harm. (AP Photo/Haven Daley)

Allen says the biggest barrier right now is learning what the mental health crisis signals are among all of the information available on people's phones.

A recent study suggested a rise in smartphone use has probably worsened the crisis.

People with mental illness, Insel said, usually get treatment "when they're in crisis and very late... We want to have a method to identify the earliest signs."

If smartphones can become effective predictors, app developers say the goal might be to offer automated text messages and links to assistance, or digital messages to parents, doctors and first responders.

Facebook is already doing what it calls "proactive detection." Last year, after a suicide was broadcast on Facebook Live, the company trained its AI systems to look for words in online posts that could predict possible self-harm. Friends' comments expressing concern about the user's wellbeing are part of that detection system.

Facebook founder Mark Zuckerberg announced in November that the site has helped first responders quickly reach around 3,500 people in the past year. But the company did not offer details on what has happened to those people since the incidents.

Ongoing research on the issue includes a Stanford University study of about 200 teens. Many of the teens are at risk for depression because of bullying, family issues or other problems. Teens who have been studied since grade school get an experimental phone app that asks them questions about their mood three times a day for two weeks. 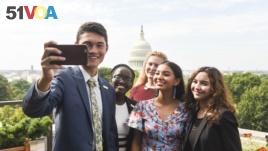 The newly-appointed 2017 Class of National Student Poets, from left, Ben Lee, Juliet Lubwama, Annie Castillo, Kinsale Hueston, and Camila Sanmiguel celebrate with a selfie on the rooftop balcony at the Library of Congress on Thursday, Aug. 31, 2017.

Laurel Foster, who is 15, is one of the teens from the study. She admits she feels stress over school and teen friendship pressures. She says depression is common at her San Francisco high school. She said using the smartphone app felt a little like being spied on. But, she added that so many websites are already following users' behaviors.

At the University of California, Los Angeles, researchers are offering online counseling and an experimental phone app to students who show signs of at least minor depression on a test. It is part of a larger effort launched in 2017 by the university to battle depression in its students. About 250 UCLA students agreed to use the app during their first year.

Alyssa Lizarraga, who is 19, is among those being studied. She has had depression since high school. Lizarraga has worried about her heavy use of smartphones and social media. She said comparing herself with others online sometimes causes her sadness. But she believes using smartphones to identify mental health problems might help push people to seek early treatment.

At the University of Illinois' Chicago campus, researchers are using crowdsourcing to test their experimental phone app. Anyone can download the free app, and nearly 2,000 have so far. All agreed to let the researchers follow things such as their typing behaviors. Dr. Alex Leow, a professor of psychiatry and bioengineering at the university, helped develop the app. The study is for people 18 and up, but Leow said it could also be used for children if successful.

Along with studies at universities, technology companies such as Mindstrong and Verily -- the tech health division of Google -- are testing their own experimental apps.

Lindsey Tanner reported this story for the Associated Press. Alice Bryant adapted it for Learning English. Ashley Thompson was the editor.

app – n. a smartphone program that performs a special function

automated – adj. operated by machines or computers instead of people

bullying – n. the act of frightening, hurting or threatening a smaller or weaker person

stress – n. a state of mental tension and worry caused by problems in your life, work or something else

crowdsourcing – n. the practice of getting input into a task or project by enlisting the help of many people, usually via the Internet

typing – n. to write with a computer keyboard or typewriter