Update Required To play the media you will need to either update your browser to a recent version or update your Flash plugin.
By Jonathan Evans
31 January 2021


Before writing her most recent novel, Maaza Mengiste began researching the Ethiopian resistance in the 1935 invasion by Italian forces. She discovered photographs of women dressed in military clothing with weapons over their shoulders. She organized them by date and location. Mengiste soon began to gain an understanding of the conflict she never learned about in school.

"These women decided to join in the front lines," she told VOA. "I had never heard that story. And this is what really inspired me to continue this, because if I didn't know it, and if a lot of other Ethiopians weren't speaking about it, this means maybe that nobody really had been paying attention to this."

Mengiste found photographs of Ethiopian girls taken by Italian soldiers. Some photos were used to persuade men to join the conflict. Others were much darker and showed the horror of war.

"They were taken by soldiers for fun, and they were passed around as jokes and as postcards to send home. And that was the side of war also that I wanted to show," she said.

The research led to her 2020 book, "The Shadow King." It tells the story of Hirut, a mistreated girl who becomes the personal guard for a person claiming to be the exiled Ethiopian ruler Haile Selassie. The novel has won worldwide praise and was a top competitor for the Man Booker Prize. However, the honor went to another book. 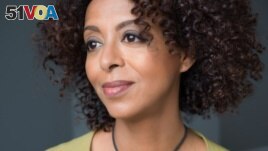 Mengiste's book revisits part of forgotten history, said Lee Child. He is a writer of 24 novels and one of the judges for the 2020 Booker Prize.

"The story is important, really, the opening shots of the Second World War, but rarely told before," Child said in a video discussing the novel. "Its place on the shortlist merely confirms its status as one of the great novels of the year."

Mengiste was born in Ethiopia in 1971. Her family left the country when she was 4 years old. They lived in Nigeria and Kenya before moving permanently to the United States.

As a girl, she remembered moments of her first years in Ethiopia. But it was not until she was much older that she considered writing them down.

"I'm surprised I kept those memories, because I was very young," she said. "But I think that the shock of what I experienced both in Ethiopia but also the migration was so intense and so deep that everything froze for me and stayed inside. And so, I would keep coming back."

Mengiste's parents did not immediately welcome her decision to become a writer. But she felt she had stories to tell. She believes other Ethiopians feel the same but may not have a way to share their stories with the world.

Mengiste said that history and literature across East Africa is told through spoken word.

"I think all of us remember those moments when we are sitting around at a dinner table or sitting having a meal and someone starts a story. And the entire room moves in that direction. Everyone is laughing, or people are crying. That's a book inside a human being. And my inspirations came from my relatives. Some of them didn't go to school."

Now, Mengiste wants to help new authors. She has helped produce a collection of stories by 14 Ethiopian writers called Addis Ababa Noir. She believes there is a lot of talent that could be shared with more people with the help of translators and publishing companies.

frontlines – n. an area where soldiers are fighting

inspired – v. caused someone to want to do something

postcards – n. cards on which a message may be sent by mail without an envelope and that often has a picture on one side