Update Required To play the media you will need to either update your browser to a recent version or update your Flash plugin.
By John Russell
27 October 2022


Autumn – the season when temperatures drop and leaves change color – is also known as fall. Fall in the United States is a lively time. Seasonal vegetables such as pumpkins and squash appear on farms, in stores, and in popular dishes. Leaves on most trees turn from green to fiery red, bright orange and golden yellow.

What are phrasal verbs? 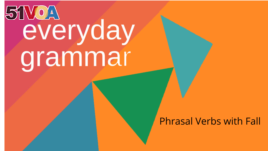 The verb form often appears in phrasal verbs that have lively meanings. Such phrasal verbs add color to the landscape of English vocabulary.

Phrasal verbs are groups of words that mean something different from what the individual words suggest. Phrasal verbs generally have a verb and one or two short words such as in, up, behind, and so on.

When we talk about phrasal verbs with fall, we mean that fall is acting as the main verb. One or more short words come after the verb fall to give it a special meaning.

Let's start with a common example: fall into.

Fall into has two common meanings. It can mean to be caught in a trap (either literally or figuratively). It can also mean to begin to do something or be affected by something without wanting or trying to.

The animal fell into the trap.

Joe answered the question before realizing he had fallen into a trap.

Joe fell into debt after his business failed.

Let's continue with another phrasal verb: fall for.

It has two common varieties: fall for (someone) and fall for (something). The difference in meaning comes after the phrasal verb.

When you fall for someone, it means you start to feel strong desire and care for them.

I fell for David because he made me laugh a lot.

I fell for her the first time I saw her.

But when you fall for something, you are fooled by something, such as a trick or joke.

Joe agreed to Anna's idea? I can't believe he fell for that old trick!

Such a statement about Joe is not kind. It is making fun of him.

Listen to the following words and use the correct phrasal verb in the blanks.

Here are a couple possible answers:

He fell into bad behaviors.

He is falling into bad behaviors.

The reason we chose fall into is because it means to begin to do something without wanting or trying to. You are saying that for whatever reason the person is developing bad habits.

Listen to the following words and use the correct phrasal verb in the blanks.

As soon as their eyes made contact, they fell for each other.

This means that the two people had a romantic interest in each other as soon as they made eye contact.

In today's report, we explored phrasal verbs that involve the verb fall. Like the colorful fall season, these phrasal verbs have colorful meanings. They are linked to ideas about unexpected results, traps, and even love.

The next time you see a phrasal verb with fall, consider its meaning. Ask yourself how it connects to – or how it is different from – other phrasal verbs with fall.

Perhaps one day you will say to yourself: I fell for that phrasal verb the first time I heard it.

phrasal verb – n. grammar : a group of words that functions as a verb and is made up of a verb and a preposition, an adverb, or both

literally – adv. in a way that uses the ordinary and usual meaning of a word

figuratively – adv. with a meaning that is different from the basic or literal meaning and that expresses an idea by using language that usually describes something else