Update Required To play the media you will need to either update your browser to a recent version or update your Flash plugin.
By Faith Pirlo
19 August 2022


The Silverball Retro Arcade is near the boardwalk or seaside walking path in the coastal town of Asbury Park, in the state of New Jersey. It houses more than 150 working pinball machines. Pinball is an arcade game in which small metal balls shoot down the machine, hitting targets in order to earn points.

The Silverball Retro Arcade is also a museum. Some of the machines are over 70 years old. They date back to the 1950s, when pinball was at the height of its popularity. The Arcade offers fans of pinball a chance to go back in time and experience their childhoods again.

William Mena is one such fan. The 24-year-old said that pinball reminds him of his father. He said that growing up they would play arcade games on the Jersey Shore in the town of Seaside. 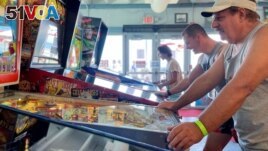 "...He used to love all kinds of old stuff and this is just something that reminds me of him. He's not around anymore, so I come here and I play and it brings back memories from the past."

Ilvento's friend and business partner Steve Zuckerman also had a pinball machine collection. So, they combined the collections, and in 2009, the museum opened under the name Silverball Retro Arcade.

Raffi Abelson, who is 48 years old, played one of the oldest pinball machines from the 1950s at the arcade.

He said, "It's like a treat for the senses. It's physical. You can touch it; it feels very different than a video game. You can really experience it."

Patty Barber is the museum's senior vice president. She agreed that pinball is a very physical game. She said that pinball takes a lot of attention and makes you live in the moment. Barber added that it is a refreshing change from just staring at a computing device.

"Even for all of us, and for young people now, it is a very tactile game. All of these different arcade games ... you really have to use all your senses," she said.

Barber compared the return of pinball machines to the comeback of vinyl music records. She said, "It's the same as we kept that alive here with the games, and it's something different or it's something from back in time that you remember doing when you were young."

arcade — n. a place where many games can be played for money

stuff –n. a group of things that are not specifically described

autism — n. a condition that causes people to have difficulty communicating or forming relationships with other people

treat — n. a reward or something special that can be enjoyed on occasion

stare – v. to look at someone or something for a long time often with your eyes wide open

tactile — adj. related to the sense of touch