A South African judge has granted bail to athlete Oscar Pistorius, after an appeals court last week convicted him of murder.

The double-leg amputee and Olympic sprinter will remain under house arrest while awaiting a new sentence. He was convicted of murder for shooting his girlfriend, Reeva Steenkamp, in 2013. 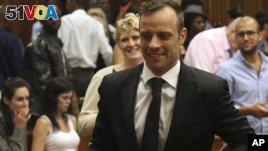 The Paralympic track and field star plans to take the case to South Africa's Constitutional Court for review, according to his lawyer. The constitutional court is the highest court in South Africa.

This past October, Pistorius was released from prison. He served less than one year of the five-year term behind bars. He was to serve the rest of the culpable murder sentence under house arrest.

Pistorius will again appear in court April 18 to go over the next steps in the legal process.

The Olympian is not considered a flight risk. He will be issued an electronic monitoring device.

The staff of VOA News wrote this story. Jim Dresbach adapted it for Learning English. Kathleen Struck was the editor.

Are you or were you a fan of Oscar Pistorius? Has that changed since his murder conviction? We want to hear from you. Write to us in the Comments Section or visit our 51VOA.COM.

bail – n. an amount of money given to a court to allow a prisoner to leave jail and return later for a trial

Paralympic -- n. an athlete with a physical condition who participates in sports competition with similar persons

amputee – n. a person who has had an arm or leg amputated

sprinter – n. a person who runs or goes very fast for a short distance

manslaughter – n. the crime of killing a person without intending to do so