Update Required To play the media you will need to either update your browser to a recent version or update your Flash plugin.
By Bryan Lynn
06 October, 2016


A plane was evacuated Wednesday in Louisville, Kentucky, after a passenger reported smoke coming from a Samsung smartphone.

All passengers were safe after getting off the Southwest Airlines plane. The plane was to travel to Baltimore, Maryland.

The U.S. Federal Aviation Administration confirmed in a statement that a Samsung phone had caused the smoke. The agency did not say which Samsung model was involved and said it is continuing to investigate the incident.

Samsung also did not say which smartphone model caused the emergency. The company said in a statement that it would examine the device.

Samsung issued a recall of its new Galaxy Note 7 device last month after receiving several reports of overheating problems. The company said the overheating was linked to problems with batteries that caused some phones to catch fire. The recall reportedly covered at least 2.5 million phones worldwide. 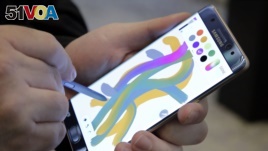 Sarah Green is the wife of the airplane passenger whose phone overheated. Green told the media that the phone was a new Samsung Galaxy Note 7. She said her husband, Brian, recently got the phone as a replacement following the Samsung recall.

Green told Louisville's Courier-Journal newspaper that her husband called from someone else's phone to explain what happened.

He told her the phone began making popping noises and started giving off smoke after he turned it off. "He took it out of his pocket and threw it on the ground," she told the newspaper. The plane had not yet taken off.

An official with Louisville's Metro Fire Department confirmed the passenger threw the phone on the ground after it started smoking. The official said the phone caused minor damage to the floor where the device landed.

Flight attendants on many airlines have also added a warning about the Samsung devices during pre-flight safety demonstrations.

Joshua Fatzick reported this story for VOANews. Bryan Lynn adapted it for Learning English, with additional information from reports by the Associated Press and Reuters. Ashley Thompson was the editor.

evacuate – v. to remove people from a dangerous place or situation

battery – n. power source placed inside a car or other device to supply it with electricity

replacement – n. a thing that takes the place of something else