Update Required To play the media you will need to either update your browser to a recent version or update your Flash plugin.
By Dan Friedell
03 August, 2017

The job opening was announced by the United States space agency, NASA.

The Washington Post called the job title "one of the greatest ever conceived."

If you think this job seems just right for action movie stars like Bruce Willis in "Armageddon" or Will Smith in "Men in Black" or "Independence Day," you are not alone. 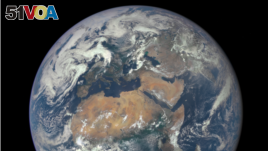 This image of Earth was taken by NASA. The U.S. space agency is looking for a "Planetary Protector."

The announcement says the job pays up to $187,000 yearly. It is getting a lot of attention on social media this week.

One person wondered if the job comes with a cape like a superhero would wear.

But before you start practicing your fighting skills, take a closer look at the description of the job:

"Planetary protection is concerned with the avoidance of...biological contamination in human and robotic space exploration."

This means the person who gets this job will be in charge of making sure Earth organisms are not accidentally taken to other planets. He or she will also be responsible for making sure samples collected on other planets are kept safe when they make it back to Earth.

NASA saw the job listing was getting a lot of attention, so it posted a video from Catharine Conley, the current officer.

The video explained the job by comparing what happens on Earth when non-native species are brought to a new continent.

When plants, fish, insects and other animals come to an area where they have no natural predators, they can kill native plants, eat other animals and damage crops.

NASA is concerned that might happen if a space vehicle brings something from Earth to another planet.

Conley is a biologist. So if your science background is not strong, you might not be a good fit for the job.

She has not yet said if she will re-apply for the job.

If you still think you might be a good fit for the job, keep one other thing in mind: you must be a U.S. citizen.

Dan Friedell wrote this story for VOA Learning English based on reports by Popular Mechanics and the Washington Post. Mario Ritter was the editor.

Why would you make a good planetary protection officer? We want to know. Write to us in the Comments Section or on 51VOA.COM.

cape – n. a piece of clothing that does not have sleeves and that fits closely at the neck and hangs over the shoulders, arms, and back : a short cloak