5 Planets Align in the Sky in Rare Formation

Update Required To play the media you will need to either update your browser to a recent version or update your Flash plugin.
By Bryan Lynn
26 June 2022


The five major planets in our solar system have lined up in a rare formation that sky watchers can see with their own eyes.

Astronomers say the formation is expected to remain in the sky through the rest of June. The planets involved are Mercury, Venus, Mars, Jupiter and Saturn. They are the brightest planets in the solar system.

Seeing two or three major planets close to each other can be a common sight. But the American Astronomical Society said in a statement that seeing all five together is rare. The last time such a planet formation happened was in December 2004. 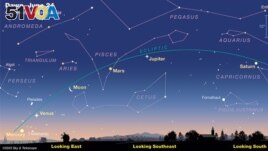 This graphic image shows the positions of the five major planets in our solar system. The planets are lining up in a rare formation that is expected to be visible in the sky through the rest of June. (Image Credit: Sky & Telescope graphics)

The society said the best time to watch the five planets is shortly before the sun rises. They will be "stretching across the sky from low in the east to higher in the south," the statement said.

Some astronomers are calling the event a "planet parade."

A map published by the Astronomical Society's Sky & Telescope magazine shows the planets appearing from left to right in this order – Mercury, Venus, Mars, Jupiter and Saturn. Mercury will appear at the lowest point on the horizon.

The planets should be visible without special equipment such as a telescope. But binoculars will be helpful. Cloudy weather will also affect visibility, so astronomers suggest some planning for the best experience.

"If it's cloudy on the dates of note, you still have all the mornings in between to take in the view of the five naked-eye planets adorning the southeastern horizon," the society said. "Just make sure you set your alarm and wake up on time."

Mercury is the most difficult to see because it is closer to the glow of the sun. But the other planets should be easy to see, even without the use of binoculars, for several more days.

On June 19th, the American Space Agency NASA tweeted about the beginning of the unusual planet lineup. "Look up starting tonight to see Venus, Mars, Jupiter and Saturn spread out and appear to line up in the sky." NASA noted that on June 23, sky watchers got a special treat, when the "crescent moon" joined the lineup.

A "crescent" describes the shape of the moon as it appears early in its first quarter or late in its last quarter. During this period, only a small edge of the moon is visible and is lit up by the sun.

As June ends, the planet parade will come to an end. Astronomers predict the next chance to see the five-planet formation will be March 2041.

NASA says June is also a good time for more serious sky watchers to observe one of the best-known "globular star clusters." These "clusters," or groups, are spherical collections of stars gathered closely together at their centers. They can include tens of thousands to millions of stars. They orbit the centers of many galaxies.

The one currently most observable is called M13, also known as the Hercules Cluster. But the space agency notes that binoculars or a telescope will be necessary to see it. "Find M13 in the constellation Hercules, which is high in the east in the first couple of hours after dark in June," NASA advises.

A constellation is a group of stars that forms a shape in the sky and has been given a name and has a story behind it.

The stars in M13 are thought to be around 12 billion years old. That is nearly as old as the universe itself, NASA notes.

Bryan Lynn wrote this story for VOA Learning English, based on reports from the American Astronomical Society, Sky & Telescope and NASA.

horizon – n. where the sky seems to touch the land or sea

binoculars – n. a pair of tubes with glass lenses at the ends that you look through to see things far away

adorn – v. to add something decorative to a person or thing

glow – v. to produce a continuous light and sometimes heat

spherical – adj. something with a round shape, like a ball

galaxy – n. one of the independent groups of stars in the universe