Update Required To play the media you will need to either update your browser to a recent version or update your Flash plugin.
By Anne Ball
17 December, 2016


Planting more lentils, chickpeas or other crops known as pulses will improve the health of the world's soils.

That information comes from the United Nations Food and Agriculture Organization (FAO).

The health of soils around the world have reached critical levels, according to the U.N. agency. It says that means hunger and poverty levels could worsen.

About a third of the world's soils are damaged because of erosion, pollution, cities expanding and other issues. This is up from the early 1990s, when the damage soil estimate was between 16 and 24 percent, said Ronald Vargas, who helped prepare the FAO report.

Growing cities and populations mean an increasing need for more food. The pressure on the remaining land is growing.

"If our soil is not healthy enough, we will have serious issues," Vargas told the Thomson Reuters Foundation. He said it will take 15 years or more and a large amount of investment to build up the soil.

Lentils, chickpeas, dried beans and other pulse crops are part of the legume family. They can grow almost anywhere. Pulses take nitrogen from the atmosphere and leave it in the soil. Nitrogen helps plants to grow.

Cereals grown after pulses provided 1.5 tons more per hectare than other crops. The FAO report said that is almost the same as adding 100 kilos of nitrogen fertilizer to the soil.

In a statement, he said they protect the environment, increase productivity, and contribute to adapting to climate change. They also provide important nutrients for the soil and crops planted after them.

The main damage to soil comes from erosion — the break down and loss of the topsoil by wind, rain and repeated use of machinery. The FAO report said the world is now losing soil 10 to 20 times faster than it is replacing it. 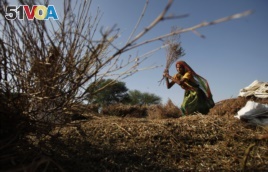 Indian village woman with lentil plants on the banks of the Chambal River near Bhopepura Village, India. (AP Photo/Altaf Qadri)

Nature takes between 100 and 1,000 years to produce 1 centimeter of soil. Unless that small amount is protected, it can be lost in just a single rainfall or high wind, Vargas said.

"It is almost impossible to bring back that soil loss. So what you can do is try to avoid losing more," he added.

The new report said that a study in India shows how growing pigeon peas reduced soil runoff and erosion by up to 59 percent.

Healthy soil can absorb, or take in, heavy rainfall. If the soil is very firm because of overuse by agricultural machinery, or walking, the rain is not absorbed. So, instead, the soil washes away and may cause flooding.

Healthy soil can also reduce carbon dioxide or other gases linked to rising temperatures on Earth's surface. The first meter of soil contains carbon, noted Vargas. He said that if the soil not well protected, carbon is released into the atmosphere.

The effect of not taking good care of the soil is serious, Vargas said. "We will be facing poverty, we will have more issues of food security ... we will not be able to deal with ... floods and drought. So we will compromise our future," he said.

The Reuters news agency reported on this story. Anne Ball adapted the report for Learning English. George Grow was the editor.

pulses – n. crops that are part of the legume family, like peas, beans, lentils and chickpeas

erosion – n. the gradual destruction of something by natural forces (such as water, wind, or ice)

cereal – n. a grain or plants that produce it

drought – n. a long period of time with little or no rainfall

adapt - v. to make a change in reaction to something else