Update Required To play the media you will need to either update your browser to a recent version or update your Flash plugin.
By Anne Ball
07 May, 2017


Researchers may have found an unusual way to reduce plastic pollution, one bite at a time.

It turns out that the common wax worm can eat plastic. Also known as the Galleria mellonella, these worms may help reduce the waste caused by plastic bags.

Each year, one trillion plastic bags are used around the world. They are made from polyethylene -- one of the strongest kinds of plastic. 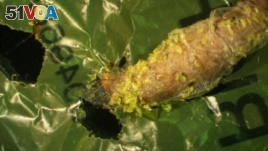 This image shows a wax worm chewing a hole through plastic. Polyethylene debris can be seen attached to the caterpillar. (Federica Bertocchini, Paolo Bombelli, and Chris Howe)

The wax worm is the larvae, or young form, of an insect called the greater wax moth. These kinds of worms are also called caterpillars.

Federica Bertocchini is with the Institute of Biomedicine and Biotechnology of Cantabria in Spain. She says researchers found that the larvae of the Galleria mellonella are able to biodegrade the plastic bags. To "biodegrade" means to break down by natural processes or bacteria.

They discovered this by accident, Bertocchini explains.

She says the plastic bags holding the wax worms "became riddled with holes." In other words, the bags had holes all over them when the worms were inside.

Bertocchini, a beekeeper, says she made the chance discovery after removing the worms from beehives, where they live. She put the worms in a plastic shopping bag, which became full of holes.

Bertocchini worked with other researchers from the Spanish National Research Council and Britain's University of Cambridge's Department of Biochemistry. She carried out timed experiments on the worms.

She says the worms can "do damage to a plastic bag in less than an hour." When 100 worms were placed in a normal British plastic shopping bag, the holes began to appear in just 40 minutes.

After 12 hours, researchers saw "an obvious reduction in plastic mass."

They say a single enzyme produced by the worm is responsible for the chemical process that breaks down the plastic.

They also found that the worms turned the polyethylene into a different organic compound called ethylene glycol. It is used in making polyester fibers as well as antifreeze for vehicles. It is not clear if the worms produce enough for commercial use.

Plastic is not the worm's natural food

Plastic is not the natural food for the wax worm. But the researchers say that since they lay their eggs in beehives, the larvae feed on beeswax.

"Wax is a polymer, a sort of ‘natural plastic,' that has a chemical structure that is not dissimilar to polyethylene," Bertocchini says.

Researchers say they still need to better understand how wax is digested, or processed, in the worm. Finding that out could lead to a solution for dealing with plastic waste.

But, she adds, we should not throw polyethylene into the environment, "just because we now know how to biodegrade it."

The study was published in the journal Current Biology.

Anne Ball wrote this story for Learning English with material from VOA News and the Associated Press. Ashley Thompson was the editor. We want to hear from you.

Write to us in the Comments Section and visit us on 51VOA.COM.

biodegrade – v. to break down by natural processes or bacteria.

riddle – v. to make many holes in with something

organic – adj. of, relating to, or obtained from living things

polymer – n. a chemical compound that is made of small molecules that are arranged in a simple repeating structure to form a larger molecule