Update Required To play the media you will need to either update your browser to a recent version or update your Flash plugin.
By VOA
05 March, 2013

And I'm Christopher Cruise. Today we follow plastic bottles and other plastic objects as they go to one of the largest recycling centers in the United States. And we tell about the effect a tax on plastic bags is having in the nation's capital.

Reduce, reuse, recycle. Recycling has become a part of American life. It also is an important part of the waste-processing industry. In fact, many cities and towns in the United States now have recycling programs.
To learn how such a program works, we will go to a recycling center in the eastern state of Maryland. 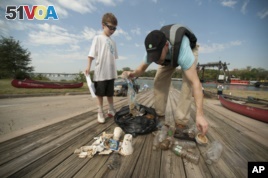 Volunteers participating in the International Coastal Cleanup collect litter in the Anacostia area of Washington, DC.
The recycle bin in the home or office is often the last stop for empty containers. But for papers, plastics, cardboards and cans, it is the beginning of a trip thousands of kilometers long.
Yehenew Gedshew directs a recycling center near Washington, DC.
"As long as people throw their trash, we have a job."

His recycling center processes about 35 tons of material an hour. How does it process that much every hour? Yehenew Gedshew says the business is highly-organized.
"First what happens is, dump trucks bring materials to our site. They dump it on the tipping floor. It goes to the first screen where the cardboard and the rest of (the) material is sorted out."

The rest of the material goes on a belt that carries the glass and plastic to the last screening area. The glass gets crushed and the plastic gets sorted and flattened.
"This is a very sophisticated machine. And that belt brings it down to the bunker. The plastic goes to the bunker, from the bunker we put it to the baler, it gets baled and gets shipped out."

Local recycling programs often require people to separate plastics, papers and glass. But Yehenew Gedshew says sorters at his recycling center do that all that work. He says the center ships most of its plastic to a processing center in North Carolina, more than 500 kilometers to the south. At that center, mountains of bottles become piles of plastic. They are ready to be melted and shaped into something new.

From the store to the recycling bin, and from there to just about anywhere you can imagine, plastic bottles spend a lot of time on the road. And so have we. We now go to Fayetteville, North Carolina. The city is home to the Clear Path Recycling center. It is one of the largest plastic recycling centers in the United States. Jay Chilton supervises the center.
"On an average week we receive anywhere from 1 to one and one half million pounds of bottles into the plant."

Not far from the Clear Path Recycling is a huge storage area for the plastic objects. They enter the recycling center to begin the process that will change them.
"This is where the whole bottles enter the whole bottle wash. It's just like your front-end loading washing machine at your house. It's just a lot longer, and a lot bigger."

Hot water washes paper labels off the drink bottles and removes dirt. The plastic is broken up into what the plastics recycling industry calls "PET flake." Another center will buy the flake to melt and mold into something else. The flake fills trucks and is sometimes stored in silos like farmers use to store grain.
"These silos hold roughly 300 metric tons of PET flake, and the one we're standing on now, we have about 150 metric tons of flake, and there's three of these."

Add up the numbers -- almost one kiloton of plastic flake waits to be changed into something new.

Plastic bottles spend their lives on the move. Machines mold and fill them with our favorite drinks. When we are done drinking, machines destroy the bottles and make them into new bottles. Their journey never ends. But our trip has come to an end in Wilson, North Carolina.

In our program, we have described the trip made by plastic bottles from stores to recycling bins and then to recycling centers. The bottles are then broken down into small pieces, which are put into bags. Now, we will witness the rebirth of a plastic bottle.
Mark Rath is a supervisor at Peninsula Packaging. At his business, pieces of plastic become products like carry-out trays at food stores and restaurants.
"This will become a plastic sheet, and eventually a thermoform product."

Peninsula Packaging melts and flattens plastic so it can be shaped and molded. The process is complex.
"We take the clear chips like this, and it goes into an oven, and it cooks for about 3 to 4 hours in that oven."

The plastic cooks at almost 200 degrees Celsius. When the melted plastic comes out of the oven, it is made into carry-out trays or other food packaging. The plastic is then wrapped, rolled and taken to what is called a "thermoform station."
"We unwind the plastic into a very long oven where we heat it again, and then we'll form it in a forming station. We'll follow it through and see what happens to it."

What happens to the recycled plastic involves a vacuum, lots of pressure, and -- believe it or not -- more recycling.
"If you could imagine that you're cutting cookies out of a piece of dough on the counter...you get a round cookie and you have all this dough left over...we put it back through, grind it up into little pieces and put it back through the extrusion process."

Mark Rath says all of the plastics in this packaging center become some kind of container in their next lives.
"That'll end up being a fresh-cut-salad base. Not sure where it goes, but it'll end up some place with celery and carrots and tomatoes."

It has taken several days, but a plastic bottle like the one we bought in Washington, DC has now become a salad tray in North Carolina.
Many workers, hundreds of kilometers, and tons of plastic: all pieces of a waste industry that seems to waste as little as possible.

Countless things affect the health of our environment. What we take from nature may not harm it as much as what we add to it. For years, many people have harmed the environment by throwing away plastic grocery bags. But in Washington, a "bag tax" has changed the behavior of many people, and the way business affects the environment.

The Anacostia River flows through southeast Washington into the better-known Potomac River. The Anacostia is often called the city's "other river." Tommy Wells is a member of the Washington, DC city council. He is worried about the health of river. He notes that some people have called the Anacostia, one of the 10 most polluted rivers in the country.
Mr. Wells says he was tired of seeing so many plastic bags in or near the river.
"I wanted something that got into people's heads; not their pockets, which is why we came up with a nickel."

Stores in Washington now require people to pay five cents -- a nickel -- for each disposable plastic bag. The money goes into the "Anacostia River Clean Up Fund." People who bring their own bag do not pay anything extra.
Has the "bag tax" helped? Bret Bolin is with the Anacostia Watershed Society, a group that is working to protect the river.
"In just about 3 and a half months of the bag fee, people were already reporting that they were seeing a lot less bags in the river and at cleanup sites than in past years."

Councilman Tommy Wells agrees that the bag tax worked.
"There was a 60 percent reduction of the amount of bags that were pulled out of the river."

The local government estimates that stores gave shoppers almost 300 million bags in 2009. Mr. Bolin says the bag tax caused the number to drop sharply.
"And they were estimating something like 55 million being distributed in 2010, which is an 80 percent reduction, which is amazing."

The five cents a bag tax added two million dollars to the River Cleanup fund in its first 10 months. Tommy Wells and Brent Bolin are pleased with the effect of the tax. But when we talked with some store owners and shoppers, we found they were not so happy.
"Ninety percent of people complained, and they don't want to buy the bag."
"Customers don't like it at all."
"They'll pay $100 for the booze, but not 5 cents for the bag."

Other critics say that in difficult economic times, any tax is unfair to poor people and could cost jobs in the plastic business. But many people still support the tax.
"It's easier."
"I carry my own bags."
"I mean... I don't have to pay for it."
"I just bring my own since I have them."
"It's free!"
"Everybody brings their own bags now."

But supporters of the tax, like Brent Bolin and Tommy Wells, say reducing the use of plastic bags is the only way to stop them from polluting the environment.
"You can't keep pulling trash out of the river forever."
"Our city is so much more beautiful now that we don't have these bags blowing in our trees and our environment."

There is still much work to be done to clean up the nation's capital and the Anacostia River. But change is taking place -- five cents at a time.
Related Articles
go top