Update Required To play the media you will need to either update your browser to a recent version or update your Flash plugin.
By VOA
09 July, 2014

A new report says plastics are responsible for $13 billion in damage to the oceans and the undersea environment. The findings were announced recently at a United Nations conference in Nairobi, Kenya. The report tells about harm to sea life -- and what might be done to improve the situation.

Plastic thrown away carelessly makes its way into rivers and other waterways. The plastic eventually reaches coastal areas and ocean waters. After a while, it collects in the sea. And plastic never goes away.

Nancy Wallace heads the Marine Debris Program at NOAA, America's National Oceanic and Atmospheric Administration. She says plastic is not biodegradable – destroyed by bacteria or natural processes. Instead, it just breaks up into smaller pieces over time.

Nancy Wallace says the oceans contain a lot of chemicals and other pollutants. She notes that chemicals like DDT are illegal now. But she says the remains of such products may find their way to plastics floating in seawater. Then, fish may eat the plastics. 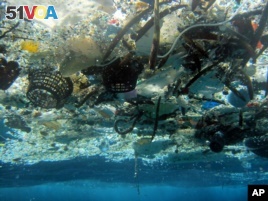 That means harmful material may get into our food supply. But the NOAA expert says people can make a big difference. She suggests using fewer single use product containers and throwing plastics away correctly. She also likes plastic recycling programs – where old bottles and other plastics are collected, broken down and used to make new products.

Nancy Wallace says people should really care about the environment. She says human beings cause pollution and they can take steps to stop it.

Richard Mattison leads Trucost, the company that presented a report at the U.N. Environment Assembly in Nairobi. He says the findings suggest another way: a business plan that opens new markets for plastic products that last. Mr. Mattison spoke to VOA on Skype.

"You could reduce the energy intensity of plastics production by using renewable energy resources. You could reuse bottles in our households many times if you wish to, rather than ending it after the first use. We could, when we get rid of that plastic, recycle it and reuse it, which replaces the need for virgin raw materials."

Andrew Russell directs the Plastics Disclosure Project, which released another report at the U.N. conference. He says it calls on companies to improve methods for using plastics. The report asks for them to better measure and direct plastic use. And he said it calls for information about the way plastic is thrown out or removed from use.

Mr. Russell spoke to VOA over SKYPE. He said industry could save money.

"We also see them to be much more aware, much more cognizant of risks they face in the environment from a reputation perspective or from a regulatory perspective. And if they think about plastic the way they do other things, then I think these opportunities will present themselves."

Mr. Russell says that by putting a new value on plastic, industry has a special reason to clean up the environment. But he also says all of society must join to deal with the problem.