Update Required To play the media you will need to either update your browser to a recent version or update your Flash plugin.
By VOA
12 March, 2015


Two policemen were shot early Thursday in the midwestern American city of Ferguson, Missouri. The shooting happened a few hours after the city's police chief resigned. A federal investigation had found his department treats people of color unfairly.

One officer was shot in his upper body. The other was shot in the face. Both are expected to recover. The shootings took place during a protest at the Ferguson police station.

Officers say they believe the shots came from a gun fired from about 120 meters away. Police searched a house and have detained three people in connection with the shooting investigation. 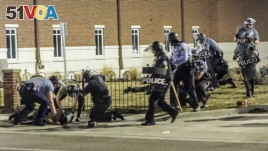 Police officers react to the shooting of an officer outside the police headquarters in Ferguson, Missouri March 12, 2015.

Iraqi military and volunteer fighters are moving toward the center of the Islamic State-controlled town of Tikrit. Attacks and bombings by the terrorist group have slowed the military offensive.

Wednesday night, the leader of one of the largest Shi'ite militias said the militants in Tikrit "have two choices -- surrender or death."

Thousands of Iraqi troops joined with volunteer militias early last week to try to take control of the city from the Islamic State fighters.

Reports from Somalia say the U.S. has carried out a drone strike against a vehicle carrying leaders of the militant group al-Shabab.

Somali officials and individuals close to al-Shabab told VOA's Somali Service that the drone attacked a car Thursday night outside the southwestern town of Bardhere.

The targeted car reportedly belongs to Adan Garaar, a top member of al-Shabab's security service, the Amniyat. Sources tell VOA the vehicle was destroyed in the drone strike. It was not immediately clear whether Adan Garaar was killed.

Adan Garaar is believed to have links to the gunmen who attacked the Westgate Mall in the Kenyan capital Nairobi in 2013. More than 60 people were killed in that attack.

Iranian leaders unhappy about a letter from U.S. Senators

The Iranian leader said the letter represented, in his words, "disintegration" in U.S. politics.

The United States, Britain, China, France, Russia and Germany are seeking guarantees that the Iranian nuclear program is peaceful, in exchange for cancelling economic sanctions. Iran has repeatedly said it is not trying to build nuclear weapons.

controversial – adj. relating to or causing much discussion, disagreement or argument; likely to produce controversy

gradually – adv. happening in a slow way over a long period of time

disintegration – n. to break apart into many small parts or pieces