Update Required To play the media you will need to either update your browser to a recent version or update your Flash plugin.
By Mary Gotschall
24 April, 2016


Researchers are using the polio virus to fight cancer cells in the brain.

A team at Duke University is using a polio virus to infect tumor cells. It sets off an immune response that lasts for several months. The tumor goes away permanently.

Dr. Matthias Gromeier began clinical trials more than three years ago. So far, 12 of 20 patients with a type of brain tumor called glioblastoma have responded well to the treatment. 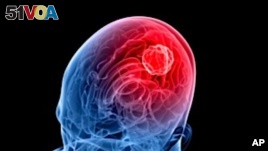 A new treatment uses the polio virus to fight cancer cells in the brain. (AP)

Gromeier said these patients had no chance of survival before the treatment. He added, "If you look at them today, you would not know they were cancer patients."

This may seem like a miracle cure. But Gromeier pointed out that the approach has limits.

It causes a toxic reaction that can cause brain swelling. This causes other side effects like muscle weakness and paralysis, seizures, limb swelling and tingling, speech impairment and headaches.

Still, Gromeier said, "I am optimistic that we have identified the right dose and the right way to use our virus to get an immune response strong enough to fight the tumor, but not so strong to harm the patient."

He called immunotherapy, "the most exciting and most promising development in cancer research." He said it would one day transform the way tumors are treated.

Glioblastomas, the most common and lethal of all brain cancers, affect an estimated 240,000 people around the world per year.

Maia Pujara reported on this story for VOANews. Mary Gotschall adapted her report for Learning English. Kathleen Struck was the editor.

polio – n. a serious disease that affects the nerves of the spine and often makes a person permanently unable to move particular muscles

clinical – adj. relating to or based on work done with real patients; of or relating to the medical treatment that is given to patients in hospitals

glioblastoma – n. tumors that arise from the supportive tissue of the brain. They grow and spread rapidly and are usually cancerous (Source: the American Brain Tumor Association)

paralysis – n. a condition in which you are unable to move or feel all or part of your body

seizure – n. an abnormal state in which you become unconscious and your body moves in an uncontrolled and violent way

impairment – n. a condition in which a part of your body is damaged and does not work well

headache – n. a pain in the head