Update Required To play the media you will need to either update your browser to a recent version or update your Flash plugin.
By Ashley Thompson
09 December, 2018


The month of December usually marks the beginning of tourism season in Sri Lanka. Visitors come to the Indian Ocean island nation to enjoy its beaches, historic places, interesting nature and tasty food.

Tourism represents about 5 percent of the country's $87-billion economy.

But Sri Lanka's current political environment is keeping visitors away. Observers are worried about the possible economic effects.

Mahinda Rajapaksa, who replaced Ranil Wickremesinghe as prime minister, lacks a parliamentary majority. A Sri Lankan court has prevented Rajapaksa from taking power. Violence has broken out in parliament and the 2019 national budget has been delayed. 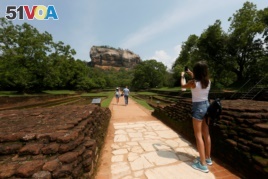 High season for travelers to Sri Lanka usually runs from December to March. Most visitors come from Europe, India and China. But many trips are being canceled, especially among Europeans. The Reuters news agency received that information from someone at the national Sri Lankan airlines. The person asked not to be identified.

The person told Reuters that, "The crisis started just when tourists take a decision where to go...It has discouraged many of them."

Chandra Mohotti is manager of the high-end Galle Face Hotel in the Sri Lankan capital of Colombo. She said that 20 percent of planned visits to the area have been canceled. She said that normally, the 200-room hotel would be filled at this time of year. But instead, the hotel has been forced to offer low-cost rates to appeal to tourists.

The crisis has also affected business travel. Sanath Ukwatte, president of the Hotels Association of Sri Lanka, said some companies have chosen to move their planned events to Singapore, Indonesia and other places in Southeast Asia.

Harith Perera is president of the Sri Lanka Association of Inbound Tour Operators. He said if the current situation continues, the economic effects "will be significant."

discourage - v. to make (someone) less determined, hopeful, or confident

significant - adj. large enough to be noticed or have an effect