Update Required To play the media you will need to either update your browser to a recent version or update your Flash plugin.
By Pete Musto
11 January 2020


All over the world, more and more young people are becoming involved in political activities. In many cases, higher education is related to, or even at the center of, their activism.

More recently, demonstrations began spreading across India after an attack on protesters at a university in New Delhi.

Some college-age activists have even turned against higher education. This week, students in Chile restarted protests against what they call an unfair university admissions system. And a few years ago, protests against the high cost of study programs hit nearly every university in South Africa. 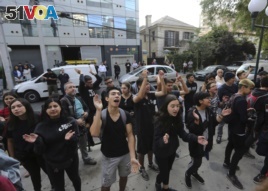 High school students shout slogans against their final high school exams, which are used as university entrance exams, outside their school in Santiago, Chile, Tuesday, Jan. 7, 2020.

Noëlla Richard says students in many places have become more politically active in recent years because they are tired of waiting for their voices to be heard.

Richard is Youth Global Program Manager for the United Nations Development Programme. She argues that, generally speaking, educated young adults in almost every country see the world in similar ways. They are highly informed about major international issues, like climate change, and want peace -- both in their home country and worldwide.

She says they also want to change conditions that have led to problems in the past.

But young people do not see those in power working towards those goals, or representing them in the way they want to be represented, Richard says. So they have chosen to take action and produce change in different ways.

In Yemen, a not-for-profit group has worked with young people to fight drug abuse and avoid extremist groups. In Kosovo, a youth-led organization has been developing an employment training program. And in Pakistan, another group has young businessmen working together to prevent religious extremists from taking control of their businesses.

In the United States, college students have shown their interest in politics in a more traditional way: voting in elections.

Last September, Tufts University's Institute for Democracy and Higher Education published its latest National Study of Learning, Voting and Engagement. The study explores the voting records and data for about 10 million American college students. It found that the number of students who voted in U.S. elections more than doubled between 2014 and 2018.

Adam Gismondi is Director of Impact at the Institute. He says that college student involvement in political activities dates back hundreds of years.

In U.S. politics, there have been periods of heavy student involvement, such as in the 1960s, and low involvement, as in the late 1990s. During the 2018 congressional elections, the overall percentage of Americans voting reached its highest level in over 100 years.

Some political observers have linked this with the rise of President Donald Trump as a political figure, with many people wanting to vote for or against him.

But Gismondi argues that is not necessarily the case.

"There's a lot of conversations around national politics, and there's been attention paid to the Trump administration and some of the policies as a result of his election," Gismondi said. "But I will say there's some pretty significant data out there that shows that a lot of the activism that we're seeing is issue-based. It's not necessarily party-based."

Many of the biggest issues of the day are ones that college-educated Americans have strong opinions on, says Gismondi. These include gun control, immigration reform and the rising costs of healthcare and higher education.

But another reason political activism among young people has risen is U.S. colleges and universities themselves, says Clarissa Unger. She is Director of Civic Engagement for Young Invincibles, a non-profit group that supports youth political involvement.

Unger suggests that many schools have made efforts to increase student political involvement. They take steps to ensure students stay informed about issues. Some provide resources that inform students how to register to vote and offer voting centers on school grounds.

Unger and Gismondi agree that, as a result, many students are not just becoming involved in national political campaigns. They are also voting and sometimes even competing locally as candidates for elected positions.

And, Unger notes, leaders who ignore the interests of the younger generation risk losing their power.

Noëlla Richard adds it is important that political involvement not just be limited to the college-educated. There are many poor and uneducated young people around the world who do not just deserve an equal voice, she says. They possess valuable knowledge, skills and opinions -- all things leaders must consider when making any decisions about the future.

Pete Musto reported this story for VOA Learning English. George Grow was the editor. Write to us in the Comments Section or on 51VOA.COM.

radical – adj. having extreme political or social views that are not shared by most people

forum(s) – n. a place or opportunity for discussing a subject

civic – adj. relating to citizenship or being a citizen

resource(s) – n. a place or thing that provides something useful