Update Required To play the media you will need to either update your browser to a recent version or update your Flash plugin.
By Mario Ritter
19 October, 2016


Researchers say concern about the elections in the United States is increasingly affecting the American economy.

Election campaigns can often affect financial markets. Studies show stock prices are more likely to jump or drop sharply during a campaign than at other times.

Also, research shows that both business leaders and the general public delay decisions to buy or invest when the future is unclear. 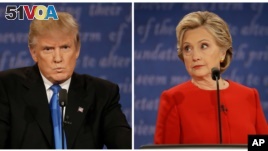 A research group called Macroeconomic Advisers says campaign promises about trade, taxes and other issues have a real effect on financial markets. The company is based in St. Louis, Missouri.

Joel Prakken works for Macroeconomic Advisers. Speaking to VOA on Skype, he said investors seem to like Hillary Clinton, the presidential candidate of the Democratic Party. He said stock prices were often higher on days when public opinion studies showed her defeating the Republican candidate, Donald Trump.

Art Durnev teaches finance at the University of Iowa. He told VOA on Skype that the influence of politics on major parts of the U.S. economy has increased.

If this is true, some of the reasons could be tied to questions about taxes and rules affecting industry and employment. Research shows that companies often delay important business decisions when they do not see a clear path forward. For example, a company may be unwilling to sell stock to the public if its leaders are concerned about economic conditions.

Durnev says companies can avoid spending money in other ways.

"They start hoarding cash, they don't want to spend. Major corporations delay their hiring, their firing decisions. Everything is on hold for them."

Joel Prakken said not being sure of the future slows down decision-making.

"Buying a car, buying a house, starting a business, managing a business, making investment decisions, when they are uncertain about the environment in which they will be making those decisions, there is a natural tendency to take a pause, take a break, sit on your hands, and wait until the uncertainty clears."

However, experts disagree on whether uncertainty plays a larger or smaller role in an individual's economic decisions. Other issues, such as actual energy costs and interest rates, can also have a strong effect.

Bill Galston is with the Brookings Institution in Washington, D.C.

"There is a lot of professional disagreement among economists as to how weighty uncertainty is in relationship to more fundamental market evaluations."

Political uncertainty, however, rarely ends with an election. The winner of the presidential election will have to work with a U.S. Congress that has shown little support for the proposals of either Clinton or Trump.

consumers –n. people who buy good for their households

hoard –v. to gather and keep a lot of something

tendency –n. to behave in a way that becomes more likely over time

role –n. the part or purpose that someone or something plays

evaluation –n. to judge the value or condition of something or someone in a thoughtful way

uncertainty – n. the state of being unsure; something that is unsure

consumer – n. someone who buys goods and services