Update Required To play the media you will need to either update your browser to a recent version or update your Flash plugin.
By Bryan Lynn
09 October, 2016


A new public opinion survey shows that more than 76 percent of Filipinos approve of the job President Rodrigo Duterte is doing.

The organization Social Weather Stations questioned 1,200 adults from across the Philippines September 24th to 27th. The group released the results Thursday.

Duterte has been sharply criticizing opponents of his deadly campaign against suspected drug dealers and users. He has openly insulted American President Barack Obama, European Union officials, the United Nations and others.

American, E.U and U.N. officials have spoken out against the anti-drug campaign, which has killed more than 3,600 people. Duterte reportedly has permitted death squads to kill accused drug offenders. 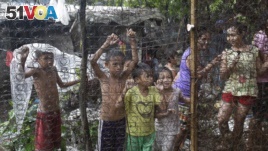 Filipino children watch as arrested drug suspects, not shown, wait outside an alleged drug den following a raid where two suspects were killed and about 90 people arrested during operations as part of the continuing "War on Drugs" campaign of Philippine P

Duterte took office last June. He won the election largely on a promise to end crime and corruption within six months of taking office.

This week, he told reporters his anti-drug campaign had cut crime in Manila by 50 percent. He said he does not expect Obama or E.U. officials to understand, in his words, "the pain we are suffering" from the country's drug problems.

Duterte said of the U.S. president, "Mr. Obama, you can go to hell."

The United States and the Philippines have a long history of strong economic and defense ties.

But Duterte recently said his country had reached a "point of no return" in relations with the U.S. He promised to seek closer ties with Russia and China "to open up the other side of the ideological barrier."

The country's Secretary of Foreign Affairs, Perfecto Yasay, wrote this week about the state of relations. The first line is "America has failed us."

New direction in US ties

Yasay said Duterte is "compelled to realign" Philippine foreign policy and not give in to U.S. demands and interests. He said the United States has used a "carrot and stick" policy to guide relations with the Philippines for many years. He said the policy was used to, in his words, "force Filipinos into submission to American demands and interests." Philippine President Rodrigo Duterte recently said his country had reached a "point of no return" in relations with the U.S. (AP)

Yasay wrote that the Philippines had learned from this experience. He said the country would no longer "permit China or any other nation to bully us or deal with Philippine interests under another carrot and stick policy."

Molly Koscina is a spokeswoman for the U.S embassy in the Philippines. She told Reuters that U.S. officials do not believe Yasay's comments reflect the current ties between the two nations.

"Frankly, it seems at odds with the warm relationship that exists between the Filipino and American people," Koscina said.

Joshua Fatzick wrote this story for VOANews. Bryan Lynn adapted it for Learning English, using additional information from the Associated Press and Reuters news agencies. Caty Weaver was the editor.

death squad – n. a group of people given the task of killing others, usually with the indirect approval of government

compel – v. – to force to do something

realign – v. to change the position or direction of something

carrot and stick – adj. a policy approach that offers both a reward and threat of punishment

submission – n. act of accepting that someone else or something has control over you

at odds with – phrase. not in agreement with