Pollution Is the World’s Number One Killer

Update Required To play the media you will need to either update your browser to a recent version or update your Flash plugin.
By Jonathan Evans
30 October, 2017


A new study has identified pollution as the world's No. 1 killer.

Study organizers say pollution is responsible for more premature deaths than war, terrorism, natural disasters, smoking and disease. By premature death, the researchers mean dying before the average age of death within a population group. Many of these deaths can be prevented.

A report on the study was published in the medical journal Lancet. 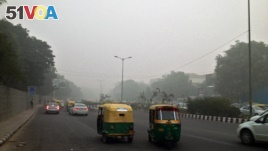 Even during the day visibility was poor on the streets of New Delhi, India, due to high pollution levels, Nov. 6, 2016.

The researchers looked at pollution levels, both inside enclosed buildings and in the world around us. They estimated that pollution killed about 9 million people in 2015. That would represent one of every six deaths worldwide.

Karti Sandilya helped to prepare the report. He said "Pollution threatens fundamental human rights, such as the right to life, health, well-being, safe work as well as protections of children and the most vulnerable."

The report said the large majority of pollution-related deaths take place in developing countries. The researchers say leaders in those countries are more concerned about building their economies and public services than environmental controls.

Some of the most affected countries are Bangladesh, China, Haiti, India, Pakistan, North Korea and South Sudan.

But Richard Fuller, another writer of the report, said pollution is tied to slow economic development in both rich and poor nations.

He said "There is this myth that finance ministers still live by, that you have to let industry pollute or else you won't develop. What people don't realize ... people who are sick or dead cannot contribute to the economy. They need to be looked after."

The report said that 9 million premature deaths a year is only a conservative estimate. It says the actual number is likely to be much higher.

A separate study by the World Bank said reducing pollution must be a top goal. It says that solving this problem would lead to solutions to other crises, including malnutrition and rising temperatures on Earth's surface.

Kenneth Schwartz reported this story for VOANews. Jonathan Evans adapted his report for Learning English. George Grow was the editor.

contribute – v. to supply or provide; to have a share in something

premature – adj. happening or arriving before the usual or expected time