Update Required To play the media you will need to either update your browser to a recent version or update your Flash plugin.
By Gregory Stachel
10 July 2022


A poor neighborhood in Rio de Janeiro, Brazil, has independently built a system to process waste in an effort to make the area healthier.

Supporters say the system could serve as a model for small communities across Brazil. 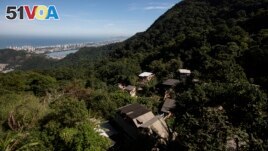 The Enchanted Valley is one of Rio de Janeiro's poorest neighborhoods. The Brazilian word for such a neighborhood is favela.

The area did not have electricity until the late 1900s. And Enchanted Valley had never been connected to the city's sewage network. Waste was polluting the local environment and putting the health of those who live in Enchanted Valley at risk.

As a result, the community set out to solve the problem on its own. It built a local waste treatment system called a biodigester. An artificial wetland was built to process the sewage created by all of the area's 40 families.

Theresa Williamson heads Catalytic Communities, a nonprofit group that supports poor communities. She said the system started full operations in June, and it is the first independently built biosystem for a favela in Brazil.

Official data says 45 percent of Brazilians' sewage is not collected.

The Enchanted Valley project took years to complete. Otávio Barros is president of a group representing the local people. He got the idea to build a sewage system when he brought a group of tourists to a nearby waterfall in 2007. They wanted to get in the water, but he told them they could not. He knew all of the community's sewage flowed down the waterfall.

Then, Barros started to look for support to build a waste treatment system. He found allies among researchers of Pontifical Catholic University of Rio de Janeiro. He had been working there as an administrative assistant.

He told the Associated Press, "It was harder back then to make people aware, show that everyone would benefit."

He and his allies secured money from the State of Rio de Janeiro. That research support led to completion of the first step in 2015. The effort also received financial support from German and Brazilian nonprofit groups Viva Con Agua and Instituto Clima e Sociedade to connect every home. And it received additional money from Catalytic Communities.

Barros worked with five other local people from the neighborhood for months, including three weeks of breaking through rock to set down pipes.

The pipes lead to the biodigester. Sewage is processed there by microorganisms that do not require oxygen. Remaining fluids then flow underneath the artificial wetlands, getting cleansed by fertilizing the plants above.

The full price of the system was about $42,300. That is one fourth of what it would have cost to place pipes through the forest to the existing sewage network at sea level, said Leonardo Adler. He is founding partner of Taboa Engenharia, which supervised the technical part of the work.

The federal government has a plan to improve sewage treatment throughout Brazil. It plans to do that through private concessions of large areas in cities. But that plan does not help small, distant communities like Enchanted Valley.

Barros said he is very happy because it was a very difficult step to bring in partners and "involve the community to capture the sewage and return it to the environment clean." He said, "It's part of a dream becoming reality," and added, "We have others for the Valley."

sewage – n. waste material (such as human urine and feces) that is carried away from homes and other buildings in a system of pipes

artificial –adj. created or caused by people and not by nature

aware – adj. knowing that something (such as a situation, condition, or problem) exists

concessions – n. the right to sell something or do business on property that belongs to the government or to another company or person