Update Required To play the media you will need to either update your browser to a recent version or update your Flash plugin.
By VOA
19 February, 2014

Recently, there have been efforts to make sure children in Africa get a good strong education. But a new report says governments are losing about $129 billion every year on poor quality education. As a result, about one in four students in poor countries cannot read a complete sentence, that represents about 175 million young people.

The report comes from UNESCO - the United Nations Educational, Scientific and Cultural Organization. It says poor teacher training and spending cuts are just two of the reasons for underperforming school systems. 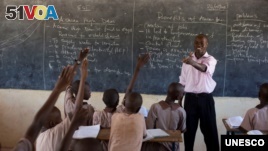 An instructor teaches students in Lodwar, Turkana, Kenya. He supplements his teachers salary with a small shop managed by him and his wife. (K. Prinsloo/ ARETE/UNESCO)

Pauline Rose, an education specialist directed the report. She says more teachers are needed across Africa, especially in countries south of the Saharan desert. She says the area would need about 225,000 additional teachers a year to guarantee a primary school education for all boys and girls by 2015.

Pauline Rose says teachers need to have a strong desire to help children learn. She says they should want to be in the classroom instead of doing other jobs. In recent years, financial support for education has gone down or stayed the same in many countries.