Update Required To play the media you will need to either update your browser to a recent version or update your Flash plugin.
By Susan Shand
20 April 2020


Some wealthier Western nations have begun easing restrictions to guard against the new coronavirus. Many developing countries want to ease their coronavirus restrictions, but they cannot afford to make a mistake.

Developing countries often lack the necessary tools, such as a strong economy, good hospitals and the ability to do a lot of testing. They need these things to overcome the pandemic.

Across Europe, people have been debating how best to ease the restrictions. Yet such a debate seems unthinkable in countries affected by conflict, corruption or poverty.

Lebanon, for example, is a small country with a huge amount of debt. It has a weak health care system and an angry population. 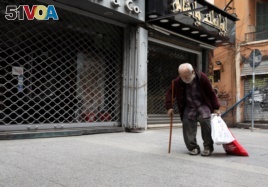 A homeless man walks past closed shops during a countrywide lockdown to combat the spread of the coronavirus disease (COVID-19) in Beirut, Lebanon April 3, 2020. (REUTERS/Mohamed Azakir)

A month of coronavirus restrictions has sent tens of thousands more Lebanese into poverty. The government is under pressure to ease some of the restrictions. Medical supplies are so limited, however, that doctors are calling for the measures to stay in place.

Lebanon was one of the first countries in the Middle East to close schools and restaurants because of the virus. On March 16, Lebanon entered a total lockdown until April 26. Its prime minister asked for patience as the country faced an "enormous economic price."

The International Monetary Fund reported last week that Lebanon's economy may shrink by as much as 12 percent in 2020. That would be the largest economic downturn in the Middle East.

The situation is similar in many other developing countries: Easing lockdowns could increase infections and set off a serious medical crisis. At the same time, keeping restrictions in place risks more economic losses and social unrest.

The inability to test and a government unwilling to be truthful could lead to bad decisions, warns Rabah Arezki. He is chief economist for the Middle East and North Africa at the World Bank.

Arezki worries that easing restrictions too early could do "more harm than good" because there is a lack of clear information, he explained.

Even wealthier nations are also worried.

Germany has Europe's largest economy. Last week, German officials announced a small easing of restrictions, which includes reopening most stores. But Chancellor Angela Merkel warned that restarting the economy too quickly could lead to problems with the health care system.

Western nations are facing severe economic problems, but their effects are eased by large government financial aid programs. For example, the United States has a $2.2 trillion program. The EU countries have agreed on a $550 billion program.

Pakistan's prime minister has appealed to wealthy countries and international organizations to simply forgive the debts of poorer countries. The IMF gave Pakistan $1.5 billion in emergency financing to help with the pandemic.

Some developing nations have decided they can no longer wait and are lifting restrictions for some industries. In Malaysia, the government permitted its semiconductor and other major industries to continue operating. Colombia permitted coal producer Drummond to restart part of its operations on April 9.

In Yemen, Libya and Syria, years of conflict have led to humanitarian disasters. In all three countries, the level of coronavirus outbreak is unknown. There is a lack of testing, medical supplies and trained health care workers.

The Associated Press and the Reuters News Agency reported this story. Susan Shand adapted it for VOA Learning English. George Grow was the editor.

lockdown - n. shutting down a country or organization completely