Pope Francis to Meet with US, World Catholic Leaders

Update Required To play the media you will need to either update your browser to a recent version or update your Flash plugin.
By Phil Dierking
12 September, 2018

The Vatican said Wednesday the leaders of the national bishops' conferences would meet with Pope Francis from February 21 to 24. They are expected to talk about clergy sexually abusing children and years of church officials covering up abuse claims against parish priests.

The meeting of more than 100 Roman Catholic officials is believed to be the first of its kind and a recognition that church leaders think the sex abuse scandal is an international problem. 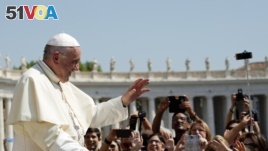 The church is facing abuse scandals in the United States, Chile, Australia and Germany, among other places.

The Vatican announcement came a day before Pope Francis is to meet with U.S. Catholic Church leaders. They are to discuss the church's sexual abuse scandal in the country and the cover-up of years of abuse claims against hundreds of parish priests.

The Vatican said that among those meeting the pope would be the head of the U.S. bishops' conference, Cardinal Daniel DiNardo, the archbishop of the Galveston-Houston area, and Cardinal Sean Patrick O'Malley of Boston.

A grand jury investigation in Pennsylvania recently found that more than 300 priests had abused at least 1,000 young people over a period of 70 years. Similar investigations are taking place in several other states.

DiNardo said the report shows the pain of those who have been victims of sexual abuse by members of the clergy, and by those who protected the abusers and permitted the actions to continue.

Archbishop Vigano has called on Pope Francis to resign because of reports that the pope knew and failed to act on accusations against Archbishop Theodore McCarrick of Washington.

McCarrick is accused of sexually abusing a teenager in the 1970s and young religious workers. Pope Francis removed McCarrick from his position as a cardinal in July.

DiNardo has said that he wants the pope to approve a full investigation of the McCarrick case, and that reports of a cover-up by the Vatican and the pope himself need to be answered.

Ken Bredemeier reported this story for VOANews. Phil Dierking adapted his report for Learning English. George Grow was the editor.

bishop – n. an official in some Christian religions who is ranked higher than a priest and who is usually in charge of church matters in a specific geographical area

church – n. a building that is used for Christian religious services

parish – n. an area that has its own local church and priest or minister

priest – n. a person who has the authority to lead or perform ceremonies in some religions and especially in some Christian religions

cardinal – n. a priest of the Roman Catholic Church who ranks immediately below the Pope