Update Required To play the media you will need to either update your browser to a recent version or update your Flash plugin.
By Alice Bryant
04 December, 2018

Delegates have gathered to work on a collective action plan, including on issues like rising sea levels and water temperatures.

Since the late 20th century, the world's oceans have experienced the highest warming on record. Oceans also take in about 30 percent of carbon dioxide emissions from the atmosphere, creating a change in ocean chemistry. The change is killing some sea life and preventing the growth of others.

And, many coastal communities around the world are facing the effects.

One such community is Lisbon, Portugal. For Lisbon, the start of summer marks the celebration of saints of the Roman Catholic Church.

Lisbon's most beloved saint is Saint Anthony. He was a Portuguese Catholic clergyman who lived 800 years ago.

Each year, Lisbon honors St. Anthony with a huge three-day festival and parade. It is the city's largest, happiest and most colorful celebration.

Almost every neighborhood has a street party with music, food and drink. And everywhere you walk, the air is filled with the smell of grilled sardines.

Tradition says that, one day, Saint Anthony went down to the river and gave a religious sermon to the fish. Hundreds of years later, the people of Lisbon still honor him with sardines...a lot of them. 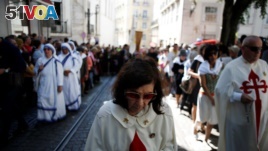 Collectively, the Portuguese eat close to 13 sardines every second during a normal day in June.

But as ocean water temperatures rise, sardines are getting harder to catch. A week before the festival in 2018, officials delayed sardine fishing in some waters. They worried about overfishing, as rising temperatures have put sardine populations in danger.

The Portuguese have always been a nation of sailors, fishermen and fish lovers.

Sardines especially are central to Portuguese history and customs. In Lisbon, the smaller harvests of the country's most treasured fish comes with a lot of emotion.

This year, Helena Melo attended the Saint Anthony festival with a group of friends. She spoke to the Reuters news agency as she and her friends ate sardines outside a social club.

Melo said she has heard the news about the sardines. "We listen to it all year round that maybe this year we will not have sardines," she said.

The fish Melo and friends ate may not have been from a fresh catch. Because of limits on fishing, the available sardines at the latest festivities were mostly frozen.

Up the hill from the social club was Jorge Rito, who has cooked for the club every June for five years.

Rito said he is worried about the decline and that sardines are "important for our finances, our economies, for us."

Susana Garrido is a researcher with the Portuguese Oceanic and Atmospheric Institute in Lisbon. She said climate change is putting sardines in special danger as compared with similar fish species.

Fishermen are seen at work in the port of Matosinhos, Portugal, May 28, 2018.

Deep, cold seawater upwelling in waters off Portugal's western coast keeps the coastal waters cool. But small differences in temperature can have a big effect on whether the fish larvae will survive and fully grow, Garrido said.

Other researchers have tested how well adult sardines survived in different conditions. But they found little evidence that things such as food availability and water temperature affected the full-grown fish, Garrido said.

So, she and her team decided to study sardine larvae. They found that temperature – not the amount of salt in seawater or other things – decided whether or not the larvae would survive.

And, she said, a recent count showed that the larval sardine numbers were extremely low.

The Portuguese sardine population started to fall about 10 years ago. Around the same time, other fish species slowly moved in.

But today, the population is near complete ruin along the coast, from northwestern Spain to the southern end of Portugal.

In 2004, officials began to bar fishing during the spring, when sardines reproduce. For a while, that seemed to help. Between 2004 and 2011, the population remained mostly healthy.

But since 2012, the population has taken a sharp drop. And fisheries supervisors have limited the days a week that fishermen can catch sardines, as well as the size of the catch. They have also limited fishing to six months each year.

‘I would miss this'

Lisbon's historic Graca neighborhood sits at the highest point in the hilly capital. For the Saint Anthony festival, spaces are set up for music, along with several temporary food and drink stands.

Luis Diogo Senior, his wife, Rita, and their two children, Luis Junior and Vera, came out to join the party.

"This is a country between Spain and the sea, so we went to the sea very soon in our history," Luis Senior said.

Luis Junior did not pay much attention to his father. He was directing his energy to his sardines.

"I would miss this very much," the 17-year-old said, after eating his third plate of the beloved fish.

Maurice Tamman wrote this story for the Reuters news agency. Alice Bryant adapted it for VOA Learning English. George was the editor.

emission – n. the act of producing or sending out something, such as energy or gas, from a source

saint – n. a person who is officially recognized by the Christian church as being very holy because of the way he or she lived

grilled – adj. cooked over hot coals or an open fire

sardine – n. a very small fish that is used for food

sermon – n. a speech about a moral or religious subject that is usually given by a religious leader

larvae – n. a very young form of an animal

plate – n. a flat and usually round dish that is used for eating or serving food