Update Required To play the media you will need to either update your browser to a recent version or update your Flash plugin.
By Dan Friedell
15 May, 2017

A series of "firsts" continued for Portugal, with Salvador Sobral's Eurovision Song Contest win over the weekend in Kiev, Ukraine.

Before Saturday, the best Portugal had done in the popular singing competition was sixth place. That was back in 1996. 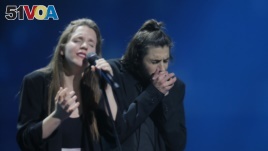 Salvador Sobral from Portugal, right, performs the song "Amar pelos dois" with his sister Luisa after winning the Final of the Eurovision Song Contest, in Kyiv, Ukraine, May 13, 2017.

Sobral's song Amar Pelos Dois translates into English as "Love for Both of Us." The song was written by his sister, Luisa, who joined him on stage for a final performance after he won the contest.

Sobral won the competition by 143 points. He finished ahead of Kristian Kostov of Bulgaria. His song was "Beautiful Mess."

When Sobral returned to Lisbon on Sunday, he told reporters he was happy his song won. "I hope the gala stops being a popularity contest," he said.

Sobral's quiet love song, however, was backed by string instruments and a piano.

"Music is not fireworks, music is feeling," Sobral said when he accepted the award.

The Prime Minister of Portugal praised Sobral's performance on Twitter.

Antonio Costa wrote: "A page of history has been written in Portuguese this evening at Eurovision. Bravo, Salvador. Bravo, Portugal."

Sobral's victory is the latest piece of good news for the country.

And experts say that Portugal's economy is getting stronger, following a financial crisis that resulted in a bailout by the International Monetary Fund and the European Commission.

And now, thanks to Sobral's victory, Lisbon will host the 2018 Eurovision Song Contest.

Sobral said he does not want to be seen as a hero, just as a musician.

Dan Friedell wrote this story for VOA Learning English. His report was based on information from the Associated Press and BBC. Ashley Thompson was the editor.

Did you like Sobral's song, or think someone else should have won? We want to know. Write to us in the Comments Section or on 51VOA.COM.

gala – n. a party or celebration