Update Required To play the media you will need to either update your browser to a recent version or update your Flash plugin.
By Anne Ball
11 September, 2016


Scientists say they discovered an Earth-like planet orbiting the star closest to our planet other than the Sun.

It is the closest planet ever found outside our solar system that could support life as we know it.

This exoplanet is just 4.2 light years away from us. It is so close that space scientists have likened it to a next door neighbor. They say it could be reached by an unmanned spacecraft before the end of the century — in time for people alive today to see it. 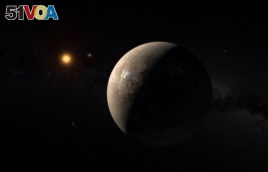 Scientists have long thought that a planet with water and a not-too-hot, but not-too-cold climate are important for life. That is, if the planet has an atmosphere. Because the exoplanet exists, scientists say, other Earth-like planets may be everywhere in our galaxy.

The newly-discovered planet is a little larger than Earth. Scientists have named it Proxima b. It orbits its sun -- Proxima Centauri – once every 11 days.

The American space agency NASA has been using the Kepler telescope and other instruments for years to look for earth-like planets. In 2013, scientists' best guess was that there are about a billion "Earths" in the universe.

Alan Boss is the Chair of NASA's advisory group for Exoplanet exploration. He told VOA that Proxima b not only confirms the discovery of a planet, but also increases the number of other possible "Earths" by a huge amount.

Boss said it is possible, even likely, that most stars have at least one earth-like planet orbiting them, which he considers "astounding."

So from the early estimates of a billion, this new research suggests there may be as many possible Earth-like planets as there are stars in our galaxy. That is, anywhere from 250 billion to 500 billion "Earths."

This makes the possibility of living organisms increasingly likely. Boss said he believes human beings will prove that there is life in places other than Earth in his lifetime. "I am 65," he told VOA, "but I expect to still be alive when it happens."

Paul Butler works at the Carnegie Institution of Washington. He told VOA that finding Proxima b "makes the case concrete" that there are other planets where life could exist.

The confirmation of this planet came from a team of astronomers that call themselves "The Pale Red Dot Campaign."

The name comes from the star Proxima Centauri, which is classified as a Red Dwarf star. Astronomers say it is seen as a "pale red dot" in the sky.

The Pale Red Dot Campaign looks for planets near Proxima Centauri. The scientists studied a very small back-and-forth wobble in the star. They believe that movement could result from the pull of an orbiting planet.

Paul Butler said the researchers used two telescopes in different countries to look for possible planets like Earth. Discovering Proxima b, he believes, changes the world.

He added, "This work confirms, that potentially habitable planets are common, and points the way to the future when such planets will be directly observed with giant ground- and space-based telescopes."

What would it take to get there?

Proxima b is 45 trillion kilometers away from Earth.

Some people alive today might get to see the first real pictures of a planet beyond our solar system. And that, is something to think about.

exoplanet – n. a planet that orbits a star other than our sun

galaxy – n. any one of a very large group of stars that make up our universe

guess – n. an opinion or answer on something you do not know much about

astounding – adj. causing a feeling of great surprise or wonder

concrete – adj. solid, like the hard strong material of concrete

habitable – adj. something than can support life