Post-College Path No Longer So Clear

Update Required To play the media you will need to either update your browser to a recent version or update your Flash plugin.
By Pete Musto
21 September, 2019


The path one takes after earning a degree from a college or university in the United States is not as clear as it once was.

Two new studies suggest that college graduates entering the U.S. job market may not work in the field they expect. And these men and women may change jobs and even industries more often than their parents ever did.

Some experts say this both presents new difficulties and opens up new possibilities in an economy that is going through changes.

The first study is from Emsi, a company specializing in labor market research. The company released the findings last month.

The Emsi study was based on an examination of the job histories of about 125 million Americans. Researchers looked at the first three jobs of individuals who completed four-year degree programs in six fields. The six were languages and philosophy, the social sciences, business, communications, engineering, and information technology.

The study found that many of the graduates started out working in the field they studied in college. For example, 20 percent of engineering graduates worked in industrial or mechanical engineering for their first job. Yet by their third job, many were working in a completely unrelated field. Advertising, sales, and financial research were among the top 10 job outcomes, or results, for all six groups.

In fact, about 54 percent of all job outcomes in the study were some form of business operations.

Clare Coffey is a data researcher and writer for Emsi. She told VOA that the study does not speak to the outcomes for college students in every field. But the fact that the six fields in the study are so different and yet had similar outcomes does suggest career paths have changed overall.

"A lot of the way we think about work and education ... is still ... like, ‘The jobs are scientists and writer and teacher;' sort of this ‘What do you want to be when you grow up?' way of thinking about jobs," said Coffey. "But the areas where there's tons of demand and tons of growth are ... being able to communicate about products for companies and also oversee the process by which they're distributed." 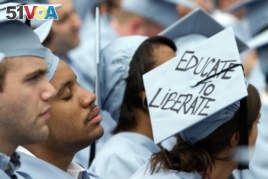 FILE - A graduate from Columbia University's School of Engineering sleeps during the university's commencement ceremony in New York, May 16, 2012. (REUTERS/Keith Bedford)

Coffey noted an important detail to consider is that in fields like the hard sciences, such as chemistry, it is easier to explain what skills your education has given you. So colleges and universities need to better explain to philosophy students, for example, the value in the skills they gain, such as written communication and forming arguments. Then graduates can better demonstrate their value as they move from one field to another.

Edwin Koc argues that changing jobs and even fields is something the current generation of college students will deal with more in the future. Koc is the director of the National Association of Colleges and Employers. He noted that his daughter, who graduated from college in 2014, has held four different jobs to date. He graduated in 1973 and has held the same number of jobs since then.

Part of the reason for this is that the current U.S. job market is very strong. This means that if people are unhappy with their current position, it will likely be easy for them to find a job with better pay, Koc said. Younger workers also have less of a connection to their employers as they have seen growing limitations on financial benefits and even job security.

"They've gone through growing up during a period when their parents may have found themselves ... losing their jobs or at risk of losing their jobs, during the Great Recession. And they're carrying that over with them: a skepticism about what an employer will do on their behalf," said Koc.

He suggested that employers also have power in the current labor market. As technology changes, the skills a person possesses upon graduating often become outdated within six years. And employers have more skilled workers to choose from than ever before, meaning almost anyone can be replaced.

This lack of straightforwardness in career paths does not just affect graduates of four-year degree programs, says Hironao Okahana. He is associate vice president for research and policy analysis at the Council of Graduate Schools.

Okahana and Koc agree that in the past, the job outcomes for those with a doctoral degree, or PhD, were much clearer. PhDs require an intense level of expertise – so much expertise that most PhD holders once were almost guaranteed jobs as university professors or researchers.

In July, the Council of Graduate Studies released a study looking at the job outcomes for over 4,700 PhD holders. All of the subjects had graduated either three, eight or 15 years ago. Overall, few Phd holders who graduated 15 years ago changed jobs recently, and most found their current jobs within three years of graduating.

This was not the case for PhD holders who graduated eight years ago, and was even less likely for those who graduated in the last three years. Also, the majority of career moves for these two groups were away from higher education and into business, government and non-profit industries.

Okahana said this means that by no means should a PhD holder consider their first job as a permanent move. It also means that they now have the chance to work in fields that they may never have considered before. But because of this, they must try to develop as many skills that are useful in different fields as they can.

"Some of the ... broader skills become important, which sort of points to ... post-secondary education not just as ... workforce development or job preparation but more ... education for the whole human," said Okahana.

He, Edwin Koc and Clare Coffey all said they agree that colleges and universities must support students' ability to grow and change. They should do this by urging students to take classes outside their usual field of study and seek out early work experience in areas of interest to them. Employers should look to fill positions with individuals who might not have studied the subjects normally expected for those jobs.

Pete Musto reported this story for VOA Learning English. George Grow was the editor. How clear is the post-college path for graduates in your country? Write to us in the Comments Section or on 51VOA.COM

distribute(d) – v. to give or deliver something to people

benefit(s) – n. something extra, such as vacation time or health insurance, that is given by an employer to workers in addition to their regular pay

skepticism – n. an attitude of doubting the truth of something, such as a claim or statement

on (their) behalf – n. as a representative of someone

post-secondary – adj. of or relating to education after high school