Update Required To play the media you will need to either update your browser to a recent version or update your Flash plugin.
By Dan Novak
19 July 2022


Sex education in American schools has long been a highly debated subject. With abortion no longer constitutionally protected, how sex and birth control methods are taught could seriously impact young people's futures in the United States.

Additionally, without national guidelines, sex education varies widely across states and local school systems. Some states even ban the discussion of abortion, for example. Abortion is a medical operation that ends a pregnancy. More than half of abortions in the United States are done with medication. 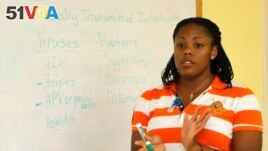 The nonprofit reproductive healthcare organization Planned Parenthood says there are seven states that ban abortion. In 12 states, abortion is legal but severely restricted. Eight other states have legalized abortion but restricted access.

Eva Goldfarb is a sex education researcher and professor of public health at Montclair State University. She said the states that ban or restrict abortion are usually the same ones that stress abstinence-only sex education.

"So the same people who want to limit access to abortion are also creating a situation in which there will be more unintended pregnancies and need for abortion," she said.

Christine Soyong Harley is the director of the Sexuality Information and Education Council of the United States (SIECUS), which supports comprehensive sex education.

She argued that abstinence programs pressure young people to avoid sex through misinformation. Abstinence-only programs lead students "to believe that if they engage in premarital sexual activity or if they identify as non-heterosexual, they will be found worthless by society."

Supporters of abstinence-based sex education however, point to some studies that support its effectiveness. But research from the American Academy of Pediatrics in 2016 found that "programs promoting abstinence-only until heterosexual marriage occurs are ineffective."

Ascend is a nonprofit group that supports abstinence-based sex education. It says that comprehensive models make teens feel pressured to have sex. The group also says that teens who have sex are more likely to do poorly in school, have decreased physical and mental health, and live in poverty. Ascend declined to comment for this story.

Penny Nance is the head of Concerned Women for America. The organization aims to "protect and promote" Christian values and conservative beliefs. She told NPR that some sex education programs "are surrendering to the idea that teenagers will be sexually active. We, as a culture, can do better."

Wendy Sellers is a sex educator in Michigan who advises the state's sex education advisory boards. The boards, made up of parents and community members, set sex education study programs for school systems.

In Michigan, like in seven other states, it is against the law to talk about abortion in schools. Sellers said that if a student asks about abortion, teachers can only give a general answer. Teachers can explain that there are limits on what they are permitted to discuss in the classroom.

"I'm a big proponent of answering every question a student asks," Sellers added. "The law has always been problematic. Clearly, it's politically and religiously motivated to not answer questions about that topic."

Jamie Sebring teaches health and sex education in a middle school in Iowa, where abortion is permitted to be discussed in the classroom. But she said the subject is not part of the study program and is only discussed when a student asks a question about it.

"I don't bring it up and actively teach it ... because I've had parents bring that up quite a bit with me," she said. Sebring added that school officials avoid teaching the topic partly out of fear of upsetting students' parents.

Now that abortion is banned in some states, women and girls that seek abortions could face legal troubles. "I think that it is even more important for people who are living in states that have abortion bans to understand the laws related to accessing abortion care," Harley said.

Goldfarb, the Montclair State professor, said access to reliable and accurate information on sex and sexuality is more important than ever. She pointed out that states have moved to ban discussion of LGBTQ topics in schools, like Florida's "Don't Say Gay" law. Other states have introduced similar bills as well.

"There is an all-out assault on sex education that is much, much, much broader than just the abortion issue," Goldfarb said.

comprehensive — adj. including many, most, or all things

attitude — n. the way you think and feel about someone or something

transmit — v. to cause to be given to others

access — n. a way of being able to use or get something

heterosexual — n. sexually attracted to people of the opposite sex

proponent — n. a person who argues for or supports something

motivate — v. to give (someone) a reason for doing something

topic — n. someone or something that people talk or write about