Update Required To play the media you will need to either update your browser to a recent version or update your Flash plugin.
By Phil Dierking
22 November, 2016


"Post-Truth" is Oxford Dictionaries' Word of the Year.

The Oxford Dictionaries website told readers post-truth could be "one of the defining words of our time."

The term comes from an idea that became popular during the 2016 election campaign in the United States.

Post-truth, as the website defines it, means to relate to situations where "objective facts are less influential in shaping public opinion than appeals to emotion and personal belief."

Oxford Dictionaries officials say they chose post-truth as Word of the Year because of its rising popularity. They said the term's usage appeared to increase 2,000% in 2016 alone.

Casper Grathwohl is the president of Oxford Dictionaries. He said that the choice was no surprise after a year filled with difficult discussions about politics. 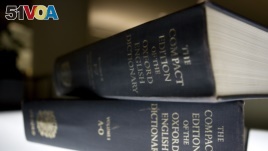 FILE - An Oxford English Dictionary is shown at the headquarters of the Associated Press in New York, Aug. 29, 2010.

Grathwohl said post-truth has become popular at a time when more people are using social media to get news. Some people trust social media more for news and information than establishment media or political leaders.

Choosing the Word of the Year

If you plan to use the word, Oxford Dictionaries defines it as an adjective. An example of it is the expression "post-truth politics."

The website said that post-truth has gone from being a new term to a word often used in political commentary. Major publications now use the term without feeling the need to define its meaning.

A number of other terms were under consideration for Oxford Dictionaries' Word of the Year. They included "Brexiteer," which means someone who supported Britain's decision to exit, or leave, the European Union. Another choice was "alt-right," which describes a group tied to extreme conservative ideas, and known to reject traditional politics. A third possibility was "adulting," a noun meaning the action of someone behaving like a responsible adult.

It appears that post-truth, with its current meaning, has been in existence for more than 20 years.

Oxford Dictionaries found its first use in a 1992 commentary published in The Nation magazine. Steve Tesich, a Serbian-American playwright, used "post-truth" in writing about the Iran-Contra scandal and the Gulf War.

"We, as a free people, have freely decided that we want to live in some post-truth world," he wrote.

This story first appeared on VOANews. Phil Dierking adapted the story for Learning English. ­­­­George Grow was the editor.

Who do you think should control public lands? We want to hear from you. Write to us in the Comments Section or on Facebook page.

entertainer – n. a person (such as a singer, an actor, or a comedian) who entertains other people

establishment – n. the people in business, government, etc., who have power over the other people in a society

refer – v. to have a direct connection or relationship to